SEOUL, Jan. 13 (Yonhap) -- Volleyball is obviously a team sport, though it didn't seem that way for the South Korean women's national team in the recent past.

For years, the all-world outside hitter Kim Yeon-koung has been both a blessing and a curse for South Korea. She has been bailing out her team time and time again with her sheer skills. But at the same time, because the team has relied on Kim so much, it has prevented the growth of other attacking players, and the lack of depth has been a real concern for the long-term health of the program.

In earning a berth in the 2020 Olympic tournament in Tokyo over the weekend, South Korea took a step in the right direction in terms of diversifying its offensive options and reducing its overdependence on Kim.

Some of it was born out of necessity. 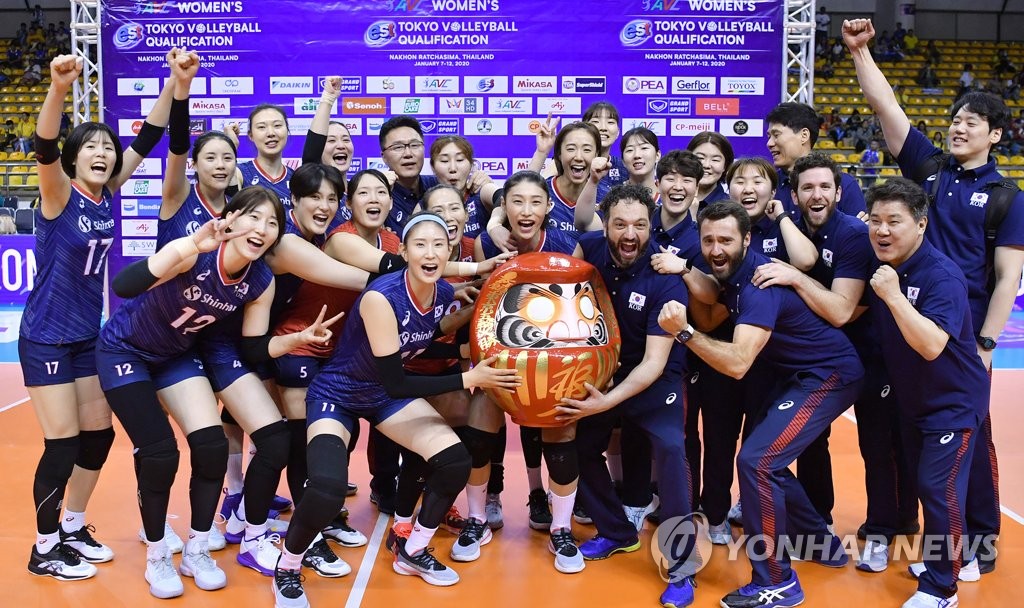 South Korea knocked off Thailand 3-0 (25-22, 25-20, 25-20) to win the Asian qualifying tournament for Tokyo 2020 on Sunday in Thailand. Kim led all players with 22 points, but she was playing through a torn abdominal muscle, an injury that limited her throughout the preliminary round and forced her to miss the semifinals against Chinese Taipei on Saturday.

With Kim at less than 100 percent, head coach Stefano Lavarini had to juggle his lineup. He had far more margin for error in the early going against clearly overmatched opponents, and in the second preliminary match against Iran, all 14 players saw action.

The first real test for South Korea came in the semifinals. Kim had been treated for her injury at a local hospital on Friday, and she wasn't available for the team's first knockout match the next day.

As Kim left a glaring hole on the left side of the court, opposite hitter Kim Hee-jin led South Korea with 18 points, helping her team bounce back for a 3-1 win after losing the first set. Lee Jae-yeong, an emerging outside hitter, had 13 points, and veteran middle blocker Yang Hyo-jin recorded a team-high six blocks as part of her 15 points. Two other players scored in double figures. 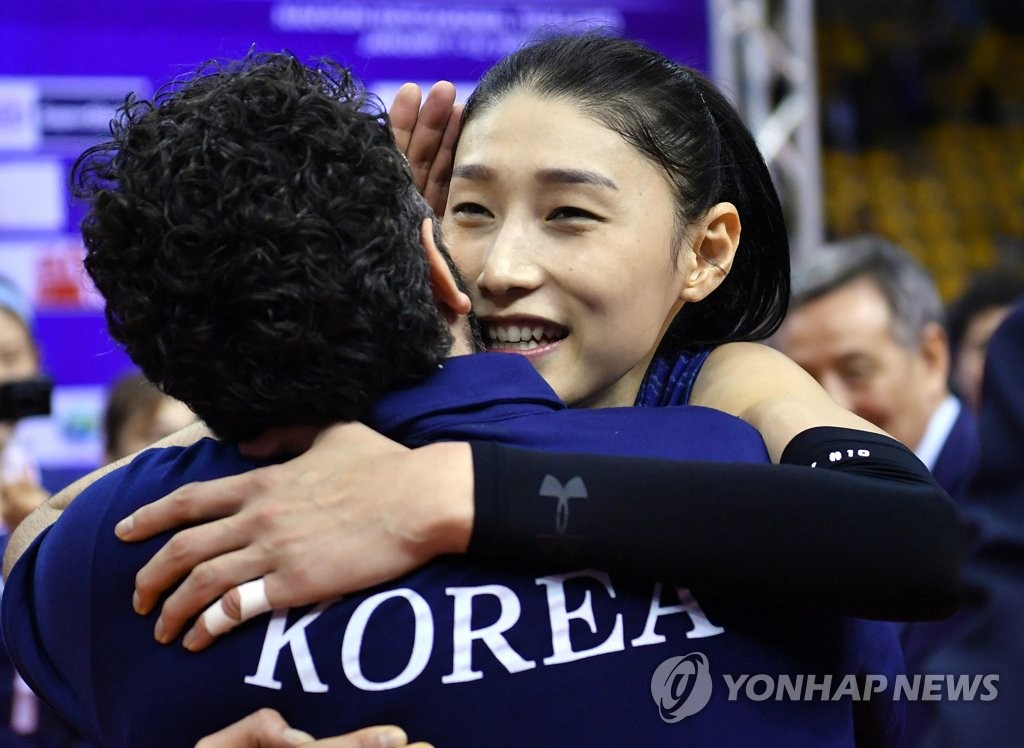 Kim Yeon-koung was back in the lineup for the final. If her gutsy and dominant performance proved anything, it's that Kim at maybe 70 percent is still better than most players at 100 percent.

As inspiring as her showing was, South Korea still needed contributions from others to beat Thailand, who'd had South Korea's numbers of late.

South Korea entered Sunday's final having dropped four of the past five against Thailand. Go back a bit further, and South Korea had gone 3-7 in the two countries' past 10 meetings, dating back to 2015.

Enter Lee Jae-yeong, who finished with 18 points to rank second on the team behind Kim. It wasn't just the number of points. It was when Lee collected them that counted.

Down 2-0 in sets and pushed to the brink before a raucous home crowd, Thailand built a 14-11 lead in the third frame. It was Thailand's first lead since early in the opening set, and the last thing South Korea wanted to do was to give Thailand some life.

Lee promptly scored the team's next four points to put South Korea up 15-14. Thailand had no answer as Lee scored with a combination of kills and block outs. Lee also chipped in some late points to give her team more breathing room, setting the stage for Kim to score the match point.

Lee scored 71 points in the tournament, best on the team and the second-highest total in the tournament. She led the competition with an attack success rate of 60 percent. Lee also finished among the top five in receiving efficiency and serve aces.

Since he took over South Korea a year ago, Lavarini has often said he'll try to turn the team into a more complete unit and move it away from overreliance on Kim. 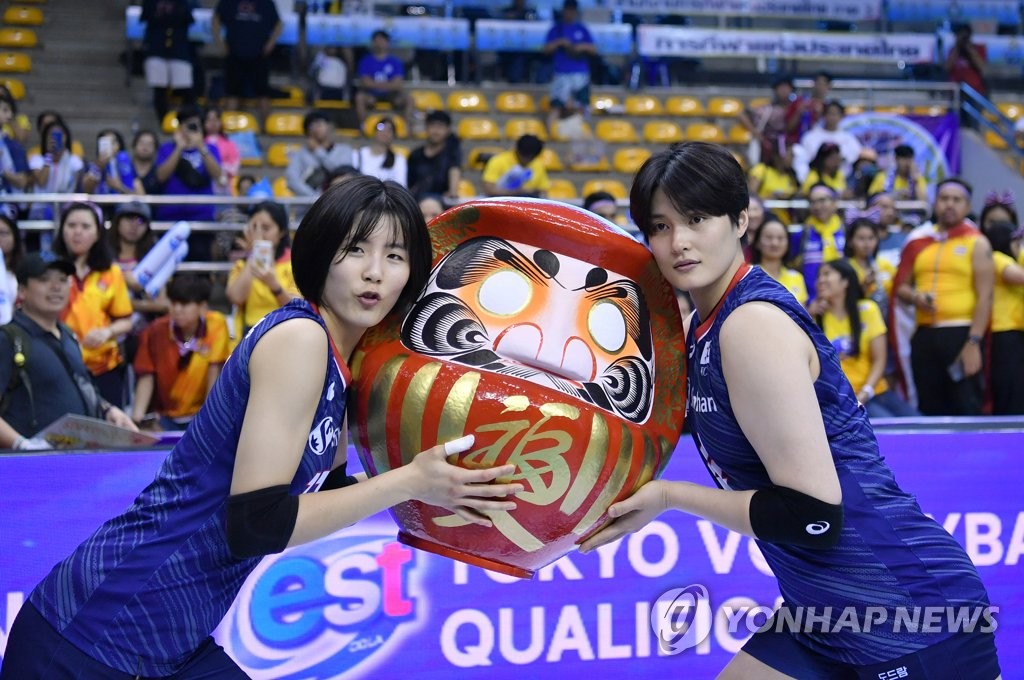 Lee, 23, may be the single biggest key that can unlock the potential for the national team. She's relatively small as an opposite hitter at 178 centimeters, but the dynamic athlete still packs a ton of punch.

The versatility of Kim Hee-jin, 28, is also an asset. She plays as a middle blocker on her pro club but slides over to the right side as an opposite hitter on the national team. Consistency remains an issue with her, but when Kim's on, she can be quite dangerous.

Kim Yeon-koung will turn 32 next month, and Tokyo 2020 will most likely be her final Olympics. The time was ripe for South Korea to start ushering in some new guards, anyway. The team will need Kim as much as ever in Tokyo, but Lavarini and his staff will take comfort in the fact that, if their "Get Out of Jail Free" card doesn't work, they can always find another from the stack of Community Chest cards.