The legislative move is expected to usher in a change in the relationship between the prosecution and police in a country where the prosecution has a monopoly on filing charges.

Currently, police are able to initiate probes but not allowed to close them without prosecution approval. Only prosecutors can file indictments in direct control of police investigation.

The revisions to the criminal procedure act and the prosecution office act, designed to give police more investigative authority, were approved in parliamentary votes boycotted by the main opposition Liberty Korea Party.

A total of 165 lawmakers voted in favor of the criminal procedure act revision, while only one voted against it and one abstained. The revision to the prosecution office act was also approved by an overwhelming margin of 164-1, with only one abstention.

The adjustment of investigative authority is one of President Moon Jae-in's key campaign pledges to reform the prosecution service, along with the establishment of an independent body to probe corruption by high-ranking public officials. 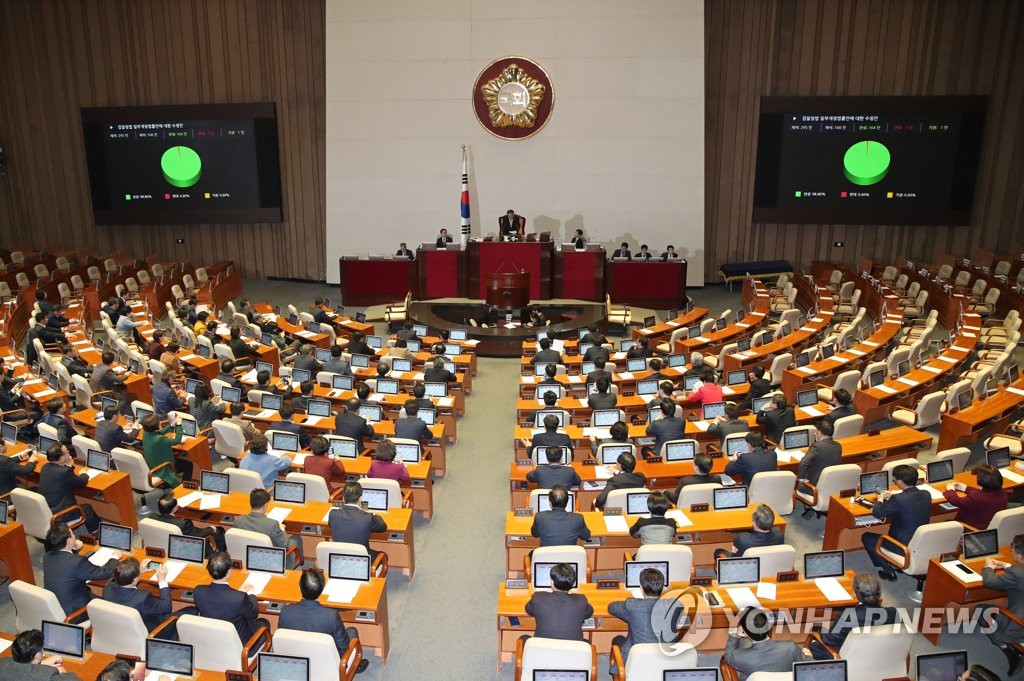 The new laws stipulate the relationship between prosecutors and police should be "cooperative" in terms of conducting probes and filing charges.

They will enable the police to close probes of cases without approval from the prosecution and put an end to prosecutors' practice of commanding police probes.

It means the police could effectively decide whether to seek indictments after their initial investigation.

Ruling party lawmakers say the legislation also has a tool to prevent the police from abusing their expanded authority.

The prosecution can request reinvestigation if the police's refusal to refer the case to prosecutors is deemed unlawful. If a further probe affirms the case, police must refer it to the prosecution.

Monday's move wrapped up a political confrontation that started in late April with the designation of key political and judiciary reform bills as fast-track legislation.

The ruling Democratic Party (DP) and its three smaller rivals put those bills on a fast track in April, along with an electoral reform bill and a measure to set up a non-prosecution agency to look into corruption by high-ranking public officials.

The National Assembly also approved three fast-tracked bills aimed at improving accounting transparency and curbing irregularities at private kindergartens. The bills were led by a ruling party lawmaker who in 2018 revealed alleged corruption among preschool owners, including accounting fraud and budget misappropriation.