Trade volume was moderate at 480 million shares worth 6.1 trillion won (US$5.3 billion), with gainers far outnumbering losers 594 to 248. 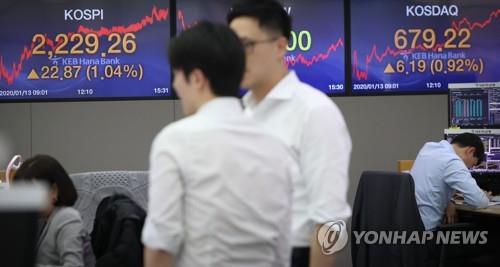 Foreign investors maintained their net buying position for the seventh straight session to scoop up a net 258.1 billion won, while individuals and institutions offloaded a net 49.4 billion won and 214.5 billion won, respectively.

With signs of a recovery in chip prices, investors have been rushing to chipmakers and have remained hopeful as the United States and China are scheduled to sign their Phase 1 trade deal in Washington later this week, possibly ending a tariff war between the world's two largest economies.

Market behemoth Samsung Electronics extended its winning streak to a fifth day, rising 0.84 percent to end at a fresh record high of 60,000 won. No. 2 chipmaker SK hynix was 1.62 percent higher, ending at an all-time high of 100,500 won.

"DRAM prices will continue to rise in the second quarter, which will eventually lead to improved earnings for Samsung Electronics throughout the year," Choi Yoo-june, an analyst at Shinhan Financial Investment, said.

Cosmetics makers also advanced on hopes that China's economic sanctions against South Korea over the deployment of a U.S.-led missile defense scheme may be lifted.

The local currency closed at 1,156 won against the U.S. dollar, sharply up 5.3 won from the previous session's close, on risk-off sentiment.

Bond prices, which move inversely to yields, closed mixed. The yield on three-year Treasurys lost 0.7 basis point to stand at 1.418 percent, and the return on the benchmark five-year government bond added 0.4 basis point to reach 1.550 percent.