SEOUL, Jan. 14 (Yonhap) -- President Moon Jae-in is expected to elaborate on his assessment of North Korea's attitude and strategy on how to resume inter-Korean cooperation, plus his view on criticism of his prosecution reform drive, during his press conference to be broadcast live on Tuesday.

The New Year's news conference is scheduled to start at Cheong Wa Dae at 10 a.m. and last for one and a half hours.

Moon will randomly select reporters to ask questions, as he did in the Jan. 10 news conference last year, according to Cheong Wa Dae officials. It means there is no scenario or prepared script for the event, they added. Around 200 members of the Cheong Wa Dae press corps and foreign journalists have applied for seats. 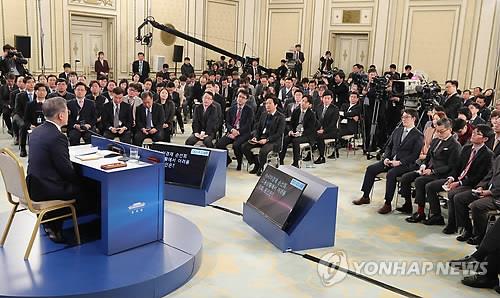 They are likely to focus on issues related to North Korea, prosecution reform and the economy. Among other key pending matters is the possibility of his government dispatching troops to the Strait of Hormuz, ongoing negotiations with Washington on splitting the cost of the U.S. Forces Korea and continued political conflicts.

Delivering his New Year's address last week, Moon extended another olive branch to Pyongyang and declared a war against real estate speculation here. He also pledged every effort to revitalize the economy and promote social justice.