The Chinese students, mostly elementary and middle school students from across China, will travel to Seoul, Incheon, Daegu and other tourist destinations in seven groups until early February, the KTO said, adding that the massive group tours have come to pass through cooperation between its Shanghai branch and China's Jiangsu International Cultural Exchange Center.

Each group of Chinese students will stay in South Korea for five days to take part in various activities, including visits to elementary and middle schools, experiences of Korean food and ski lessons, the KTO said.

They will also visit the National Museum of Korea in central Seoul, it said, noting the upcoming Korea visit is their first overseas trip. 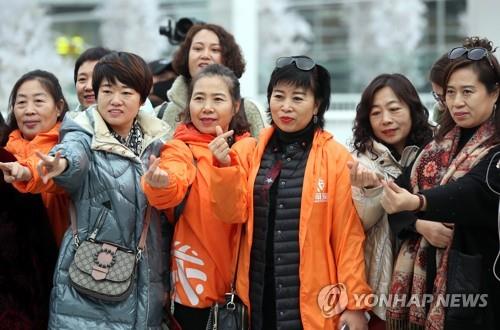 Earlier this month, about 5,000 executives and employees of Yiyongtang, a health food distributor based in the northern Chinese city of Shenyang, visited Incheon, west of Seoul, for a six-day incentive trip. After attending a business strategy meeting and a new product event at the Songdo Convensia in Incheon, the Chinese tourists visited popular tourist destinations in the port city and Seoul, including Gyeongbok Palace, Lotte World, Wolmi Island and Chinatown.

The successive Korea visits by Chinese group tourists have also raised expectations that the number of Chinese tourists here may return to the pre-2017 level.

"Last year, the KTO attracted more than 20,000 young visitors from China, recording a twofold increase over the previous year. It is notable that young Chinese students' visits will help brighten the future of bilateral exchanges," a KTO official said.