The legislature passed the confirmation motion for Chung Sye-kyun at a plenary session. The six-term ruling party lawmaker and former speaker was nominated last month.

Among the 278 lawmakers present, 164 voted to approve Chung's appointment, while 109 disapproved. One lawmaker abstained, with four votes declared invalid.

Most disapproval votes were believed to have been cast by lawmakers from the main opposition Liberty Korea Party (LKP) that has been contending that sending the former parliamentary speaker to the No. 2 Cabinet post could undermine the principle of separation of powers. 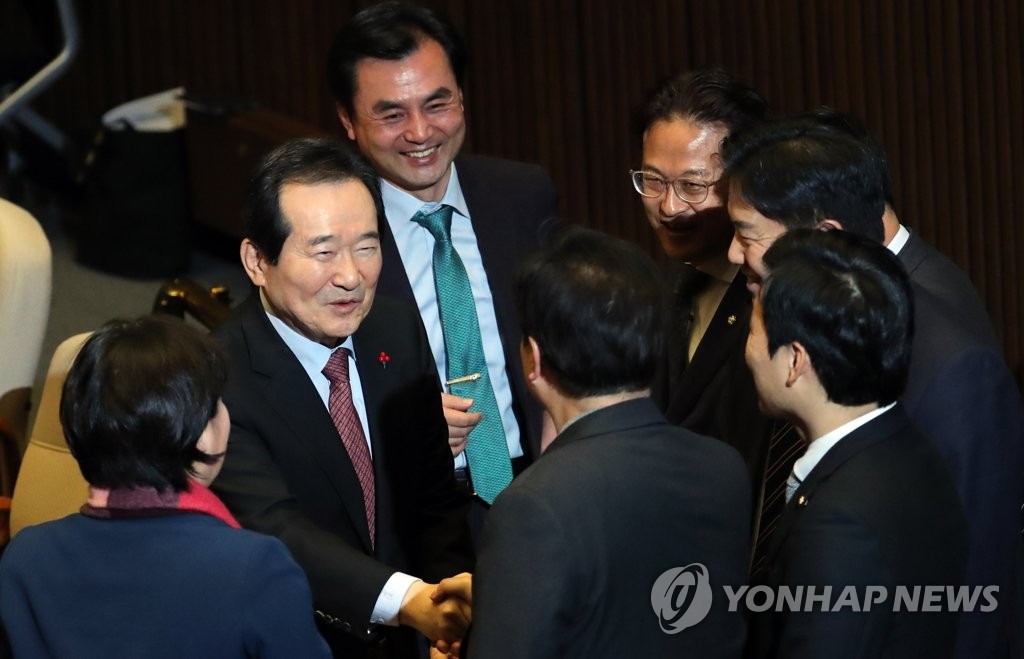 Chung, 69, led the National Assembly for two years through the end of May 2018. He was also the industrial and energy minister in 2006.

Chung's office said he will be formally appointed by the president on Tuesday.

Chung will be the second prime minister under the Moon administration after Lee Nak-yon, who plans to run in the upcoming general election after serving a record two years and eight months at the post.

Chung, who will be the nation's first speaker-turned-prime minister, is expected to focus on reviving the economy and support the government's peace initiative with North Korea.

He said last week that the two Koreas need to make efforts to normalize their joint factory park in the North's western border town of Kaesong and a tour program to Mount Kumgang, as soon as conditions are met, in a written answer to parliament ahead of his confirmation hearing.

Chung is also tasked with easing partisan tensions as the main opposition LKP is already hinting that it will not cooperate with the new prime minister.

During his confirmation hearing, Chung had said he plans to propose the formation of a Cabinet that involves opposition politicians after the April parliamentary elections.