WASHINGTON, Jan. 13 (Yonhap) -- South Korea and the United States remain apart on reaching a "comprehensive" deal on sharing the costs for the upkeep of 28,500 American troops on the Korean Peninsula, Seoul's chief negotiator said Monday.

Jeong Eun-bo made the remark to reporters upon arriving at Dulles International Airport ahead of the sixth round of defense cost sharing negotiations slated for Tuesday and Wednesday.

"We're in the process of narrowing our differences on various issues, but it's also true that we continue to be apart on how to reach a comprehensive deal," he said. 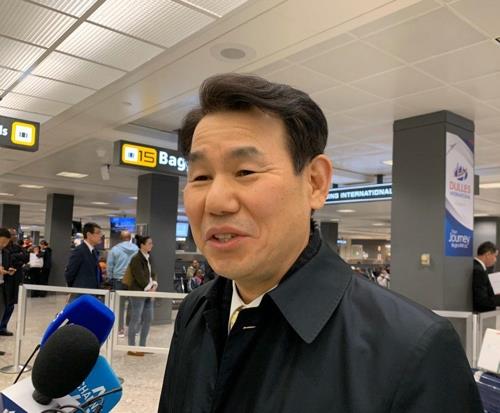 Washington has sought increased contributions from Seoul in their new defense cost-sharing deal, known as the Special Measures Agreement, for this year.

The U.S. side is also reportedly seeking to add categories of costs to the agreement to include payments for rotational troop deployments to the peninsula.

"We are conducting discussions within the framework of the Special Measures Agreement," Jeong said, noting that Seoul believes it should receive a fair assessment of the contributions it makes to the alliance.

The comment comes as South Korea has been looking at ways to support U.S. security operations in the Middle East amid heightened tensions between Washington and Iran.

Key among them is the possibility of deploying South Korean troops to the Strait of Hormuz off Iran.

"Both sides are trying very hard to come up with a creative solution," Jeong said when asked if the prospects for an early deal are far off. "Our negotiations don't deal with just one issue, so we are working to find a compromise."

Negotiations for a new deal began in September but the two sides failed to reach an agreement before the previous SMA expired at the end of December.

A further delay could affect wage payments to South Korean civilians hired by U.S. bases on the peninsula.