Kang flew into San Francisco International Airport a day ahead of her scheduled meeting with Pompeo, at which the two sides are expected to discuss South Korea's possible contributions to U.S. security operations off the coast of Iran.

The top diplomats are also expected to coordinate strategies on bringing North Korea back to the negotiation table with the aim of dismantling the regime's nuclear weapons program and establishing a lasting peace on the Korean Peninsula. 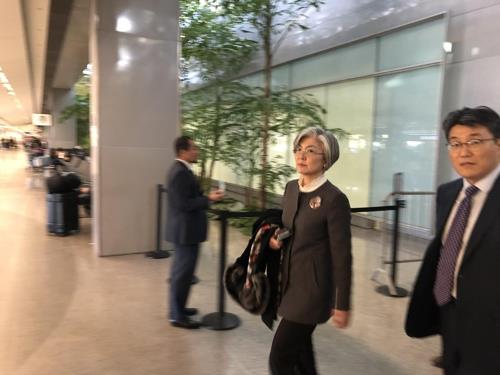 Kang did not take questions from reporters at the airport.

Before departing Seoul, however, she said her discussions with Pompeo would bear on the South Korean government's decision on whether to deploy troops to the Strait of Hormuz in support of the U.S.

Seoul has been weighing its commitment to its alliance with the U.S. against its trade relations with Iran.

On North Korea, Kang told reporters in Seoul that she believes the current situation calls for deterring additional provocations by the regime.

She added that she and Pompeo plan to share ideas on resuming the stalled denuclearization talks between Washington and Pyongyang.

A trilateral meeting is expected to take place, in addition to a bilateral meeting between Kang and Motegi on diplomatic efforts to resolve an ongoing row over wartime forced labor and Tokyo's export controls against Seoul.

FM Kang arrives in San Francisco for talks with Pompeo

FM Kang arrives in San Francisco for talks with Pompeo