In 2005, the U.S. Congress passed a resolution to commemorate Jan. 13 as the day the first wave of Korean immigrants arrived in Hawaii in 1903 to work on sugarcane plantations.

"Our country is continuously enriched by the contributions of Korean Americans," Trump wrote in the letter. "You are integral parts of our communities and our great American story, bolstering our roaring economy, strong national defense, and public service."

The letter was apparently penned for a celebration to be held Tuesday at the Rayburn House Office Building of the U.S. House of Representatives in Washington.

"Today's event is an opportunity to acknowledge the significant impact Korean Americans have on our Nation, while also reaffirming our commitment to strengthening the bond of friendship between our two countries and continuing to foster a culture of deeper understanding and respect," Trump wrote, adding that first lady Melania joins him in wishing a "joyous" Korean American Day. 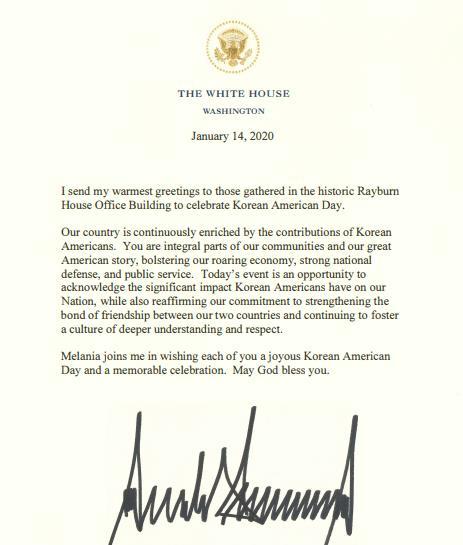