What's more urgent than any other thing is to "restore politics for dialogue, compromise and communication" in the country, Moon told Chung shortly after giving him a letter of appointment at a Cheong Wa Dae ceremony.

In that sense, the president said, Chung is the right person to serve as prime minister. 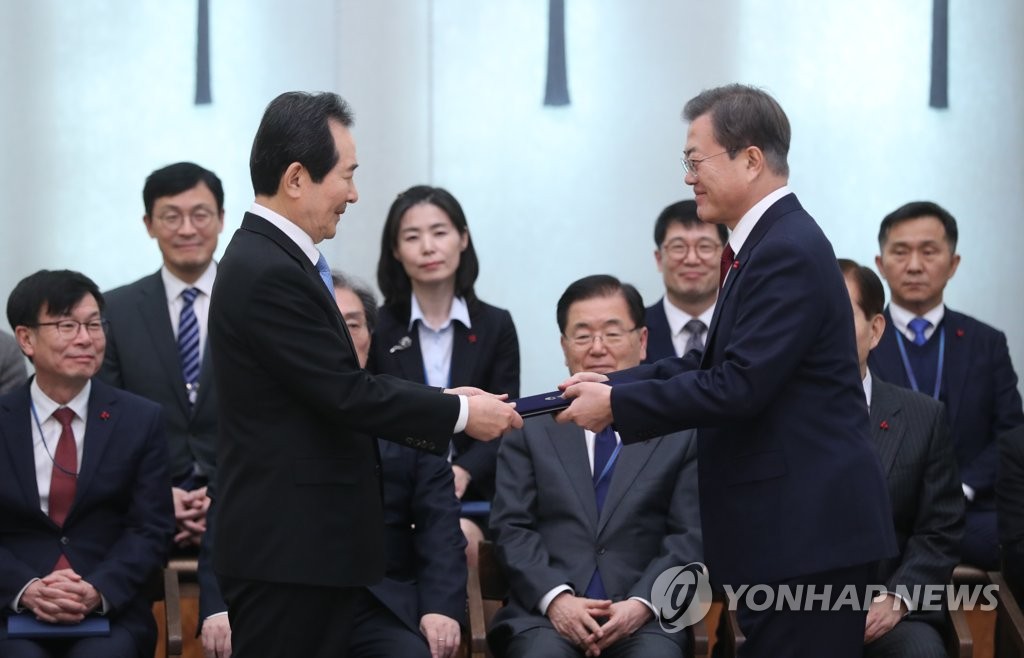 Moon said he had predicted political attacks and controversy over his choice of Chung, formerly National Assembly speaker, in terms of the democratic principle of the separation of legal, administrative and judicial powers.

"There's no person like you to be suitable for the post under the current political situations of the country," the president said. "And I thought that the value I intended to achieve through your role is far more important than the controversy related to the division of three powers."

Having been in charge of operating the National Assembly for two years through May in 2018, Chung is expected to help pull off "cooperative politics" based on dialogue, Moon added. Chung, a six-term lawmaker, once led the ruling Democratic Party and served as commerce and industry minister as well.

Before entering the political world, Chung also worked as an executive at a local conglomerate.

Moon asked Chung to support the work of Finance Minister Hong Nam-ki, a control tower of the government's economy-related policy.

In his press conference earlier Tuesday, Moon said he would grant the prime minister a greater administrative role and authority.

On Monday night, the National Assembly passed the confirmation motion for Chung during a plenary session although lawmakers with the main opposition Liberty Korea Party voted to reject it.