The number is up 15 percent from 5.3 billion tweets a year earlier, according to the U.S. microblogging website.

Some of the top 20 countries that tweeted the most about K-pop in 2019 include Thailand, other Asian countries and some in South America. 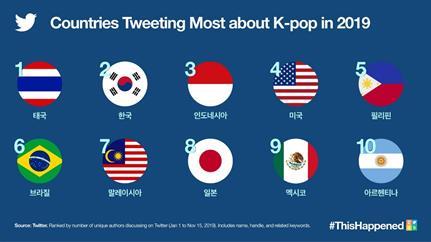 K-pop sensation BTS (@bts_twt) was the most retweeted account in 2019 worldwide, followed by other boy bands -- EXO (@weareoneEXO) and GOT7 (@GOT7Official), the company said.

Twitter said it has hosted a total of 67 events last year with various K-pop bands and artists, connecting fans globally through exclusive interviews.