SEOUL, Jan. 14 (Yonhap) -- Two emerging K-pop boy bands, Stray Kids and Ateez, will kick off globe-trotting concert tours over the next month in a bid to expand their presence outside of their home country.

The concert series' first overseas destination is New York on Jan. 29 and will be followed by Atlanta on Nov. 31, Dallas on Feb. 2, Chicago on Feb. 5, Miami on Feb. 7 and Phoenix on Feb. 9.

The band will also perform in two other American cities, San Jose and Los Angeles, on Feb. 13 and 16, respectively, according to JYP. 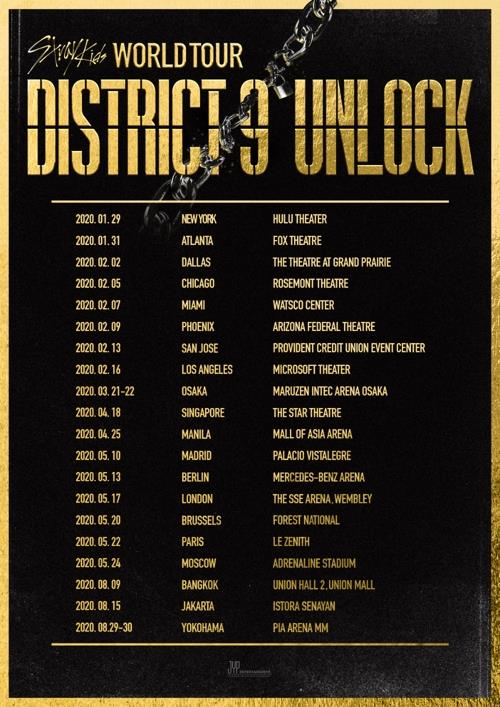 On Tuesday, the band also released the world tour's Japanese itinerary under which two-day performances are planned in Osaka from March 21-22. Following the Japanese leg, the band will also travel to European and Asian cities including Madrid, Berlin, London, Paris, Singapore and Manila.

JYP said that during the world tour, Stray Kids will throw 24 performances in 21 cities.

On Jan. 24, Stray Kids is also slated to release two English-language singles, "Double Knot" and "Levanter," under an album titled "Step Out of Cle."

Another emerging boy band, Ateez, will go on a 15-city concert tour next month.

The band is scheduled to kick off the world tour, "The Fellowship: Map The Treasure," with inaugural Seoul concerts on Feb. 8-9 before touring 14 other global cities such as New York, Los Angeles, Madrid, Amsterdam and Moscow. 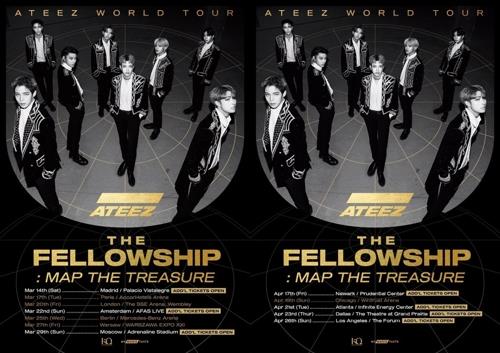 Stray Kids, Ateez to kick off world tours over the next month

Stray Kids, Ateez to kick off world tours over the next month