SEOUL, Jan. 14 (Yonhap) -- A group of 33 Korean victims of wartime forced labor in Japan and their bereaved families living in the southwestern city of Gwangju and South Jeolla Province launched a joint compensation lawsuit against six Japanese companies Tuesday.

The 33 plaintiffs include two surviving victims of Japanese forced labor, while the other 31 victims were all deceased and represented by their children or grandchildren in the second such lawsuit initiated in the Gwangju-South Jeolla region.

The civic group Citizen's Forum for Halmuni (grandmothers) and the nongovernmental organization Lawyers for a Democratic Society extended legal and other support to the forced labor victims and their families in their joint lawsuit.

In April last year, the two groups launched a similar compensation lawsuit against Japanese companies on behalf of 54 Korean forced labor victims and their families residing in the Gwangju-South Jeolla region, though the relevant court hearing has yet to begin due to the Japanese side's refusal to receive judicial documents. 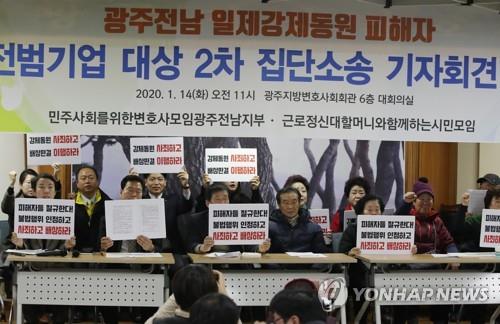 The two groups held a joint news conference in Gwangju, 330 kilometers south of Seoul, after filing the second compensation lawsuit against Japanese companies.

They said the lawsuit will clearly reveal anti-human and illegal acts committed by the Japanese government and companies during wartime, emphasizing it is difficult to improve friendship and relationships between Korea and Japan without reflecting on the past.

They also urged the creation of a Korea-Japan joint consultative body on the forced labor issue and vowed not to give up their legal fight until the rights of the victims are restored.

In particular, any financial compensation from Hokkaido Coal and Boat Co. appears to be difficult as the Japanese company already went bankrupt. But the bereaved families of the concerned victims said they participated in the lawsuit to have the illegality of forced labor recognized and demand an apology from Japan.

But Mitsubishi and other Japanese companies have not accepted the South Korean court rulings, escalating bilateral diplomatic conflict between Seoul and Tokyo.