"I think the orchestra thought I was very fresh," Lee said during a press conference in Seoul. "The Staatskapelle Berlin was seeking a generational change and I auditioned at an opportune time."

Lee became the concertmaster of the German orchestra in 2017 and was granted lifetime tenure a year later. She was the youngest and the first Asian to fill the post in the company's 450-year history.

Founded as a court orchestra in 1570, the Staatskapelle Berlin is the resident orchestra of the Berlin State Opera. Argentina-born maestro Daniel Barenboim has been serving as the orchestra's general music director and conductor since 1992.

"I had no experience as a concertmaster at all," she said. "But one of my colleagues told me, the company acknowledged that I could start with a clean slate." 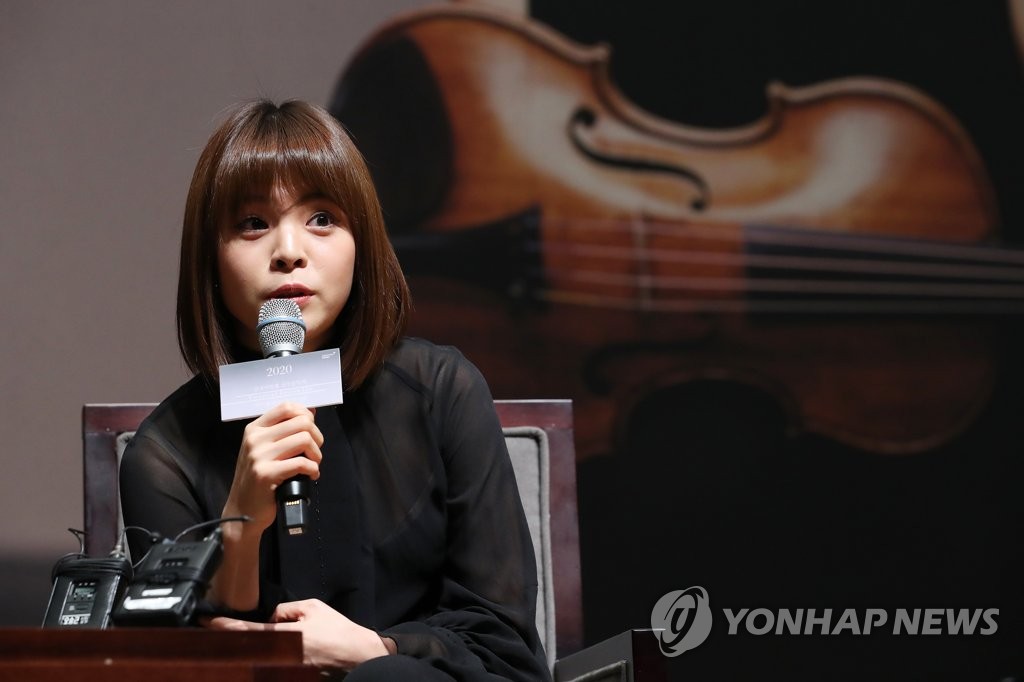 The 27-year old violinist gained international attention after winning prizes in several renowned European classical competitions, including the Queen Elisabeth Competition in 2015. She was awarded the top honor at the Carl Nielsen Violin Competition next year.

When she graduated from Hanns Eisler School of Music in Berlin in 2017, she chose to participate in an audition for the post of concertmaster at the Staatskapelle Berlin, one of the leading orchestras in Europe, instead of becoming a full-time solo violinist.

"After my performance at the audition, conductor Barenboim asked me why I wanted to be an orchestra member," she recalled. "I told him that I had fallen in love with the musical ensemble of an orchestra."

But it was not easy for Lee, in her mid-20s, to lead the first violin section of the orchestra and play the second-most important role in performing on the conservative European classical scene.

"I was so scared of working with the veteran members without experience," Lee said. "But I've tried to get closer to them and kept asking them for help. It's important to build good relationships with members."

While working for Staatskapelle Berlin as a concertmaster for about 35 weeks in a year, she performs solo concerts in the remaining time.

She will have four recitals in Korea this year as part of an artist-in-residence project by the Kumho Asiana Cultural Foundation. For the concerts, she arranged a program with handpicked music and songs.

In the upcoming performance on Thursday, she will perform eight of her favorite songs, including "Romanian Folk Dance" by Bela Bartok and "Violin Sonata" by Achille-Claude Debussy.

She said she enjoys the different experiences of playing the violin with an orchestra and as a soloist.

"It's interesting to play in a different way. I try to permeate into the whole group, but I can show off my style in a recital," Lee said. "I'm grateful for being an orchestra member and a solo violinist at the same time.