SEOUL, Jan. 14 (Yonhap) – The South Korean stock market closed higher on Tuesday to extend its winning streak to a fourth day amid hopes for improvement in trade relations between the United States and China and an imminent signing of their trade deal. The South Korean won fell against the U.S. dollar. 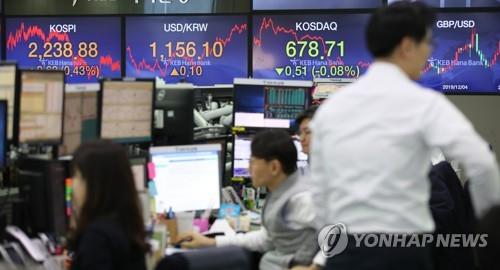 In an indication of improved relations, Washington said Beijing will no longer be designated as a currency manipulator, ahead of their signing of a preliminary trade agreement to ease tariffs later this week.

"The U.S. Treasury Department's decision to eliminate the designation of China as a currency manipulator brought positive effect to foreign buying," Seo Sang-young, an analyst at Kiwoom Securities, said.

In Seoul, most large-cap shares on the Seoul bourse ended mixed.

Chipmakers took a breather after a week-long rally as investors cashed in part of their recent gains.

Market behemoth Samsung Electronics was unchanged at 60,000 won, after opening higher, to snap its five-day winning streak. No. 2 chipmaker SK hynix was also unchanged to end at 100,500 won.

In contrast, Samsung SDI, the battery unit of South Korea's top conglomerate, jumped 2.51 percent to finish at a 52-week high of 265,500 won on upbeat market forecast for its electric vehicle battery business.

The local currency closed at 1,156.1 won against the U.S. dollar, down 0.1 from the previous session's close.

Bond prices, which move inversely to yields, closed higher. The yield on three-year Treasurys dropped 3.2 basis points to stand at 1.386 percent, and the return on the benchmark five-year government bond shed 3.7 basis points to reach 1.513 percent.