Earlier in the day, President Moon Jae-in appointed Chung, a former parliamentary speaker, as prime minister, expressing hope that he will play a role in restoring politics beset by partisan wrangling.

"The government of the Republic of Korea will (make efforts) to become a government that can buttress the people," Chung said at his inauguration ceremony.

Chung, 69, has become the second prime minister under the Moon administration, succeeding Lee Nak-yon who was the longest-serving prime minister in South Korea. 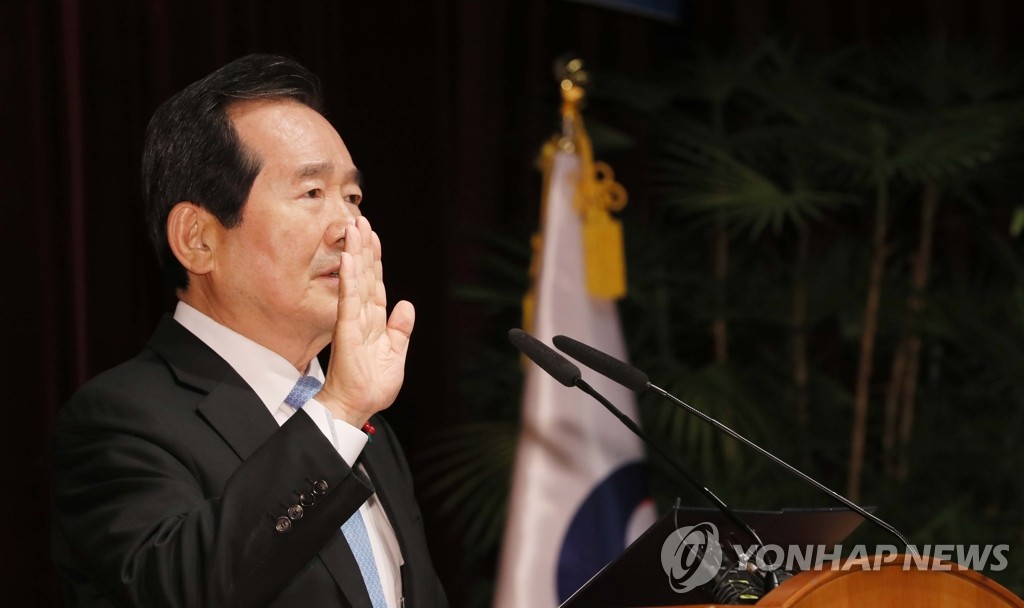 As for key tasks for the government, Chung stressed the need to bolster the economy, pursue cooperative governance of state affairs with parliament and build a fair society.

"I will make business-friendly environments to boost economic vitality. The government will lead efforts for innovation to enable companies to grapple with new challenges," he said.

Chung is known for his expertise in economic affairs. He worked at a conglomerate for 17 years before he entered politics in the late 1990s.

He served as trade minister between 2006 and 2007. During his time leading the ministry, South Korea's annual exports hit the landmark of US$300 billion.

Moon's pick appears to reflect his strong commitment to bolstering the economy in the second half of his single five-year term.

Chung vowed to seek "genuine" communication with the people and "cooperative" politics for social integration.

"In a diversified society, the administration cannot resolve everything. ... I will listen to the people's opinions on divisive social issues and seek substantive cooperation with the National Assembly beyond communication," he added.

Chung's career as former National Assembly speaker is regarded as a strong point for seeking cooperation with opposition parties.

He led the National Assembly for two years through the end of May 2018. During his term, parliament passed a motion in December 2015 to impeach President Park Geun-hye over corruption.

Chung said he will strive to build a fair society, apparently considering the situation where fairness has emerged as a pressing social issue following a political scandal involving former Justice Minister Cho Kuk.

"I will improve unfairness in various social sectors and lay the groundwork for easing inequality and polarization by building stronger social safety net," he added.