SEOUL, Jan. 14 (Yonhap) -- South Korea and Japan held working-level talks in San Francisco on Monday (U.S. time) on the ongoing row over wartime history and trade, as their top diplomats gathered there for trilateral talks with the United States, the foreign ministry said.

Kim Jung-han, director-general for Asia and Pacific affairs, met with his Japanese counterpart, Shigeki Takizaki, and discussed the issues of mutual concern, the ministry said. The two were accompanying their foreign ministers, Kang Kyung-wha and Toshimitsu Motegi, on their trips.

Kang, Motegi and U.S. Secretary of State Mike Pompeo are scheduled to hold a trilateral session on Tuesday. On the sidelines, Kang plans to meet one-on-one with Pompeo, and officials are working to set up a separate meeting between Kang and Motegi.

Relations between Seoul and Tokyo have deteriorated since Tokyo imposed export restrictions against Seoul in August in protest of the South Korean Supreme Court's rulings that ordered Japanese firms to compensate victims of wartime forced labor.

In response, the South decided to terminate a military information sharing pact with Japan, known as the General Security of Military Information Agreement. But the planned termination was suspended at the last minute in November as the two countries agreed to hold talks on the issues of export controls and forced labor.

In Monday's working-level talks, Kim reiterated Seoul's call for Japan to retract the export controls while emphasizing the government's stance that it respects the court's decision, the ministry said.

The two sides also discussed preparations for a meeting of their foreign ministers, the ministry said.

Kim and Takizaki last met in Tokyo in November, days before Seoul put off the decision to terminate GSOMIA.

In a New Year's press conference on Tuesday, President Moon Jae-in urged Japan to present ideas for a solution, while emphasizing that any solution must have the victims' support. 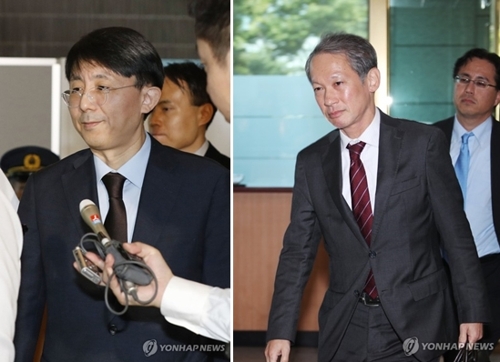