Sultan Qaboos, who is credited with having set the county on a path to development after taking the helm of the nation in 1970, died on Friday at the age of 79. His cousin, Haitham bin Tariq Al Said, was sworn in as new monarch on Saturday.

The nine-member South Korean delegation visited Oman's royal palace in Muscat, and delivered President Moon Jae-in's condolence message to the new leader, according to the ministry.

Sultan Haitham expressed his gratitude for the visit and Moon's message, it added.

Earlier, Seoul's foreign ministry expressed appreciation for the late leader's contribution to strengthening bilateral ties between South Korea and Oman through such efforts as signing a long-term energy supply contract.

Jeong then met with his Omani counterpart, Bader bin Saood Al Busaidi, and the two ministers vowed to further strengthen their cooperation in defense industries, according to the ministry. 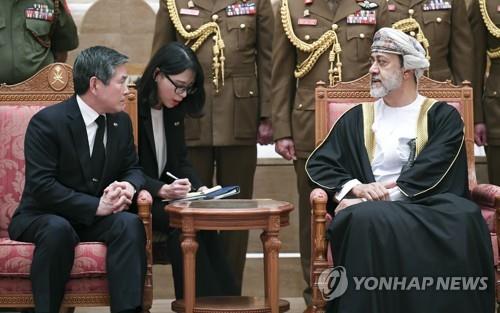