SEOUL, Jan. 15 (Yonhap) -- A South Korean consortium led by Hyundai Engineering & Construction Co. said Wednesday it has received a US$730 million order to build a power plant in Algeria.

The consortium, including POSCO International, bagged the deal from Hyunson Engineering & Construction Spa. (HYENCO), a 51:49 joint company set up by Algeria's state-run Sonelgaz utility company and the Hyundai E&C-led consortium in 2015, Hyundai E&C said in a statement.

The 1,300-megawatt combined cycle power plant will be built in the next 60 months in Biskra, 340 kilometers southeast of the capital city of Algiers. Once completed, it will have an annual capacity of 9.68 megawatt hours of energy, it said.

In the Algeria project, Hyundai E&C said it will receive $580 million and the remainder belongs to two other companies.

With the deal, the country's leading builder has won $1.8 billion worth of plant and infrastructure orders in January alone. 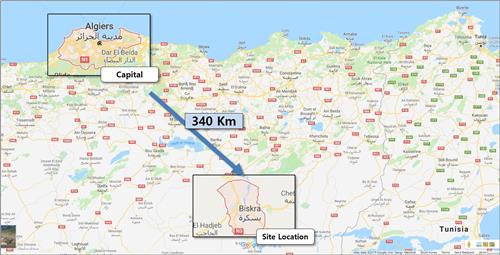