Lee Do-hoon, special representative for Korean Peninsula peace and security affairs, made the remark after arriving in Washington for talks with his American counterpart, U.S. Deputy Secretary of State Stephen Biegun.

The pair is slated to meet Thursday to discuss the way forward amid an impasse in denuclearization negotiations between Washington and Pyongyang. 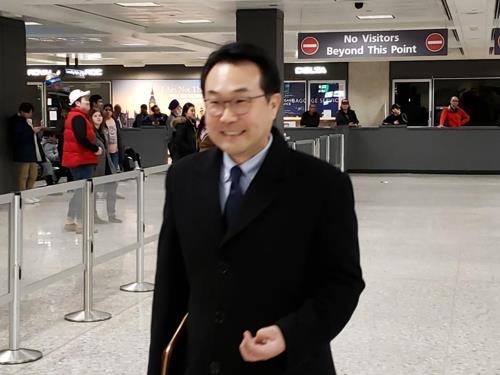 "The momentum for dialogue is getting weaker and weaker, and under these conditions the task facing South Korea and the United States is to manage the situation in a stable manner and revive the momentum for talks," Lee told reporters at Washington's Dulles International Airport.

At his meetings with U.S. officials, Lee is expected to discuss President Moon Jae-in's initiative to resume inter-Korean projects as a way of facilitating U.S.-North Korea talks.

In particular, the issue of allowing individual tours to North Korea's Mount Kumgang will likely be subject to coordination between Seoul and Washington as the U.S. is wary of any projects that could undermine the international sanctions regime against the North.

"(Individual tours) are not banned under U.N. Security Council sanctions," Lee said. "The reason we are discussing this issue with the U.S. is that we are trying to find space within the sanctions framework agreed on by the international community."

A State Department spokesperson made a similar comment Tuesday, telling Yonhap that South Korea and the U.S. are committed to "close coordination on our unified response to North Korea."

Neither said whether individual tours fall under the scope of sanctions, but their comments suggest the U.S. hopes to keep pressure on the North.

"The U.S. remains committed to fully implementing the Singapore Joint Statement, agreed to by President Trump and Chairman Kim, including the final, fully verified denuclearization of the DPRK, a goal fully supported by our ally the Republic of Korea," the senior U.S. official said, referring respectively to North Korea's official name, the Democratic People's Republic of Korea, and South Korea's formal name.