SEOUL, Jan. 16 (Yonhap) -- Legendary British rock band Queen said during a news conference in Seoul on Thursday that K-pop, as represented by boy band BTS, is the voice of the new generation as Queen once was a voice of an emerging generation.

Queen arrived in South Korea on Wednesday for its first concerts in the country.

The band, now a three-member configuration including Adam Lambert as lead vocalist, is scheduled to perform on Saturday and Sunday at Gocheok Sky Dome in western Seoul under Hyundai Card Co.'s "Super Concert" series.

The concerts come after a 2018 film, "Bohemian Rhapsody," became a sensation, drawing a 9 million viewers -- in South Korea.

Queen once again came to focus when BTS performed at London's Wembley Stadium, the venue of Queen's legendary 1985 Live Aid concert, before sold out crowds of more than 90,000 for two nights last year. 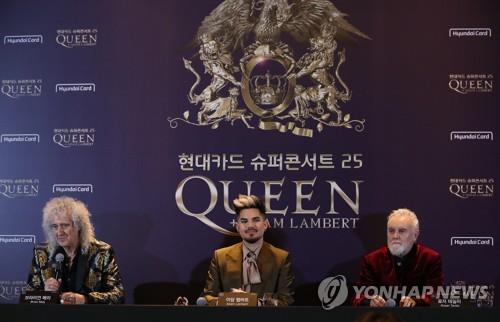 "It has made a big impression on England, it's very big," Brian May, Queen's guitarist, said during the press conference, referring to the rise of K-pop.

"It's very interesting for me to wonder how it will evolve because when we were young, rock music was the language of the kids and it grew up and everybody thought rock and roll will be finished after a few years," May said.

"It's very interesting to see what happens when K-pop does grow with the generation, does it continue to be the voice of the generation?," he said.

The guitarist admitted, chuckling, that the sensational success of "Bohemian Rhapsody" in South Korea helped bring the nearly 50-year-old band back to life.

"It definitely brought a new generation to us. We witnessed at the airport young kids screaming at us, which we haven't seen for quite a while," he said. "It has given us a new life."

This year marks Queen's 10th year with Adam Lambert, an American singer who joined the band in 2011 for the role of Freddie Mercury, the famous founding frontman of Queen.

Mercury is Lambert's personal hero and replacing him in the band was intimidating at first.

"I knew living up to the standards is gonna be nearly impossible," he recalled.

"With May and Taylor's help, I quickly learned that instead of imitating and copying what Freddie did, the key to making this work and to have some integrity is look at the songs as great pieces of music and as ways to communicate human experiences and be of service," Lambert said.

The singer said once he got the comparison to Freddie out of his head, he started to communicate with audiences. 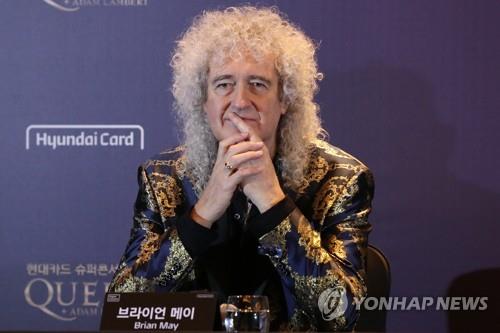 Working with the young musician is similar to but also distinct from how Queen worked with its original lineup, according to May.

"In some ways, it's very similar: we make music and we make people happy," he said.

"In some (other) ways, it's different because in those days, we were hacking out. We were creating a new situation for ourselves," May said, recounting Queen's old days.

"Whereas now, we are in a place where we know where we are. The nice thing is that we are still being creative and evolving things. Adam brings new interpretation and new life."

Nearly 50 years in, Queen still does a lot of sound checks, he also said, adding that the band continues to think of how it can change and how to move forward. 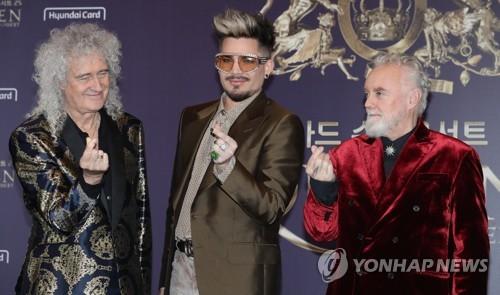