SEOUL, Jan. 17 (Yonhap) -- The United States has deployed a WC-135W radiation detection plane to one of its air bases in Japan, an aviation tracker said Thursday, a move seen as aimed at beefing up surveillance of North Korea.

The WC-135W Constant Phoenix arrived at Kadena Air Base in Japan's Okinawa, Aircraft Spots said in a Twitter post, without elaborating on the exact time of the arrival.

Nicknamed the "nuke sniffer," the WC-135W played a key role in detecting radioactive leaks after the Chernobyl nuclear disaster in the Soviet Union in 1986.

It is unclear whether the purpose of the deployment was for a simple stopover or for an operation.

An RC-135S Cobra Ball surveillance aircraft is also known to have been deployed at Kadena Air Base. 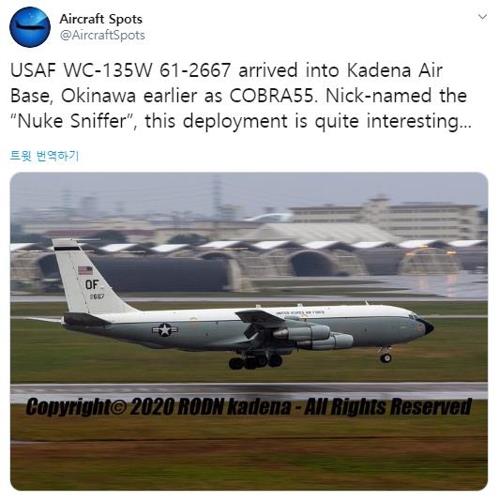 U.S. sends nuke-detecting plane to air base in Japan

U.S. sends nuke-detecting plane to air base in Japan