SEOUL, Jan. 17 (Yonhap) -- A growing number of foreigners staying illegally in South Korea are voluntarily leaving the country after the government offered various incentives, including an opportunity for reentry, to overstayers choosing to voluntary depart, a government agency said Friday.

According to the Incheon Immigration Office, the number of illegal stayers leaving the country of their own free will soared 66 percent from 433 last November to 720 last December. In the first 14 days of this month, the number already reached 369. 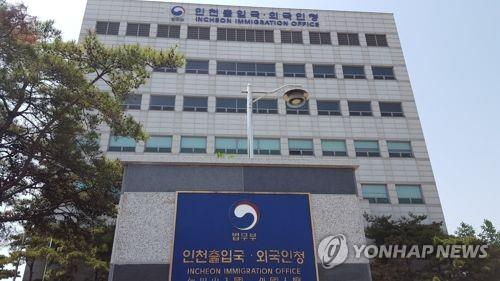 The surge came apparently after the Ministry of Justice last month announced a new policy of permitting overstayers voluntarily departing from South Korea by June this year to reenter the country if certain conditions are met.

Those who leave on their own are exempted from paying fines and given an opportunity to obtain a short-term visa for 90 days of stay here after a certain period of time following departure.

Those who reenter the country with the short-term visa and leave again before its expiry can also receive a multiple-entry visa with a validity period of one year.

In addition, the government will extend the departure deadline by up to one year for overstayers who require a certain period of time for medical treatment, pregnancy, childbirth and other inevitable reasons.

After the new visa policy was announced on Dec. 11, a daily average of 40 illegal foreigners staying in Incheon and three Gyeonggi Province cities -- Bucheon, Ansan and Siheung -- visited the Incheon Immigration Office to report their voluntary departure plans.

The Incheon office said it will actively publicize the new immigration policy in capital areas with a large population of migrant workers.