SEOUL, Jan. 17 (Yonhap) -- President Moon Jae-in called for legislation of police reform on Friday, following the recent passage of bills to transfer key investigative powers from the prosecution to police.

He made the remarks during a dinner with senior ruling party officials at the presidential compound, citing the need to balance reforms of the two agencies.

"As the police's authority has expanded significantly through the redistribution of investigative powers, legislation for police reform should follow," Moon said during the meeting with senior Democratic Party (DP) officials.

"The reforms of the prosecution and the police should go in tandem."

Moon hosted the dinner to thank DP leaders for the recent passage of several key bills, including proposals on prosecution reform.

The meeting was joined by Rep. Lee In-young, the DP floor leader, and 13 other party officials who led negotiations with minor opposition parties in the process of handling the bills, especially those on electoral and prosecution reform.

It was Moon's first dinner with the ruling party leadership at the presidential office in half a year.

The National Assembly recently passed key bills on prosecution reform -- proposals to create a special non-prosecution agency to look into corruption among high-ranking public officials and allow police to conduct criminal investigations independent of the prosecution.

Critics raised concerns that the liberal government's drive to reform the prosecution will grant police excessive power if measures to keep their authority in check are not drawn up.

Moon called for legislative efforts to reform the police, citing pending bills on the establishment of a state investigative agency and the introduction of autonomous police.

The president stressed that the National Assembly should prioritize the handling of bills related to people's livelihood issues. 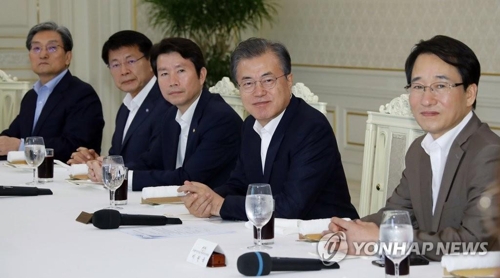