SEOUL, Jan. 17 (Yonhap) -- Three children of a former chairman of Semo Group, which was involved in the operation of the Sewol ferry that sank off South Korea's southwestern coast in 2014, were ordered by a local court Friday to cover 70 percent of the state funds spent to deal with the ferry sinking.

The funds are related to the government spending on passenger search and rescue, compensation for victims, funerals and medical treatment of injured passengers. 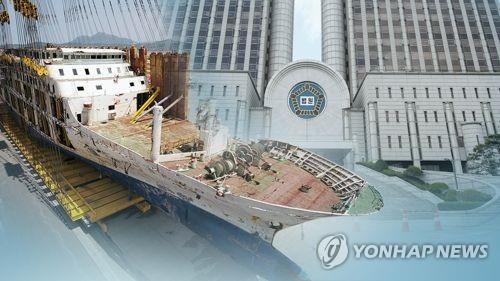 The state, which had incurred various expenses to handle the tragic ferry sinking, including financial compensation for victims, under the Sewol Ferry Special Law, filed an indemnity suit against the family of the late Semo Group chairman and shareholders of Cheonghaejin Marine Co., the shipping company that owned the Sewol ferry, claiming that they are responsible for the ferry sinking and thus must pay compensation of 421.3 billion won.

The special law stipulates that the state can exercise a right to indemnity against those blamed for the ferry sinking.

The 6,800-ton Sewol ferry sank off the southwestern island of Jindo on April 16, 2014, claiming 304 lives, mostly high school students on a school trip to Jeju Island, in one of the country's worst maritime disasters. Former Semo Group chairman Yoo was found dead on a countryside farm in June of the same year. Cheonghaejin Marine was affiliated with Semo.

The Seoul court ruled that the former Semo chairman was one of the contributors in the ferry sinking, saying he exerted influence on Cheonghaejin Marine through equity holdings, played a role in the appointment and dismissal of its chief executives and approved remodeling of the Sewol ferry.

Cheonghaejin Marine's executives and employees committed illegal acts by neglecting the ferry's overloading and other problematic practices and Yoo neglected his surveillance and supervision despite being aware of such problems, it said.

But the court limited the scope of the Yoo family's responsibility to 372.3 billion won spent by the state for its rescue and search operations, compensation for victims, funeral services and medical treatment of the injured ferry passengers.

The court ruled that the Yoo family is responsible for 70 percent, or 260.6 billion won, of the state expenditures, noting an inefficient rescue operation by the Coast Guard and the Korea Shipping Association's poor supervision of the ferry operator were also blamed for the tragedy.

It then said the late Yoo's son and daughters should evenly share the 206.6 billion won compensation to the state. Excluding a deduction from the Korea Shipping Association, the actual sum to be paid by the three amounts to about 170 billion won.

Yoo Dae-hyun, the 49-year-old eldest son of the late Semo chairman, was also named as a defendant in the indemnity suit but was excluded from the compensation order because he had legitimately relinquished his inheritance, according to the court.