SEOUL, Jan. 19 (Yonhap) -- South Korea said Sunday that it will invest 1 trillion won (US$863 million) in the next 10 years to nurture the next-generation semiconductor sector. 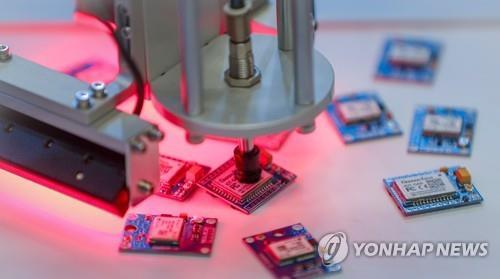 South Korea has already spent some 1 trillion won in the past five years on various research and development (R&D) programs and numerous preliminary feasibility studies.

In the field of AI chips, the country will focus on acquiring technology for platforms that incorporate neural processing units, super high-speed interfaces and related software.

The ministry said it plans to work with existing fabless companies from the outset by creating a so-called platform community that can speed up development, save money and reduce production time.

On next-generation SoC, the ministry said it will center on making semiconductors for future vehicles, electronic appliances, medicine and bio, energy and robotics, which will lead to the production of safer autonomous cars, compact communication chips, better augmented and virtual reality chips and displays.

For ultrafine fabrication processing, R&D will be focused on securing equipment and components for 10 nano chips and smaller, and in the area of software.