SEOUL, Jan. 19 (Yonhap) -- North Korea seems to have picked a high-ranking official who led inter-Korean relations as its top diplomat, possibly heralding a shift in its policy toward the United States and South Korea.

According to informed sources here on Sunday, North Korea has notified foreign ambassadors based in Pyongyang of its recent appointment of Ri Son-gwon as the country's new foreign minister.

The sources said the notification was made late last week, and his official appointment may be announced this week.

Ri Son-gwon, if confirmed, will replace Ri Yong-ho, probably signaling that the communist state may reshape its policy toward Washington and Seoul.

Ri, a former army officer, has been serving as chairman of the Committee for the Peaceful Reunification of the Country, which is identical to the South's unification ministry.

The new foreign minister has been North Korea's point man for relations with South Korea.

He was the head of the North Korean delegation to recent high-level talks with South Korea, including the meeting in August 2018 that led to President Moon Jae-in's summit with North Korean leader Kim Jong-un in Pyongyang in September the same year.

Besides his career dealing with the South, however, little has been known about his professional experience in the field of foreign affairs.

His apparent appointment came as South Korea renewed its commitment to improving inter-Korean ties amid stalled negotiations between the U.S. and the North and a chasm between Seoul and Washington over approaches toward Pyongyang. 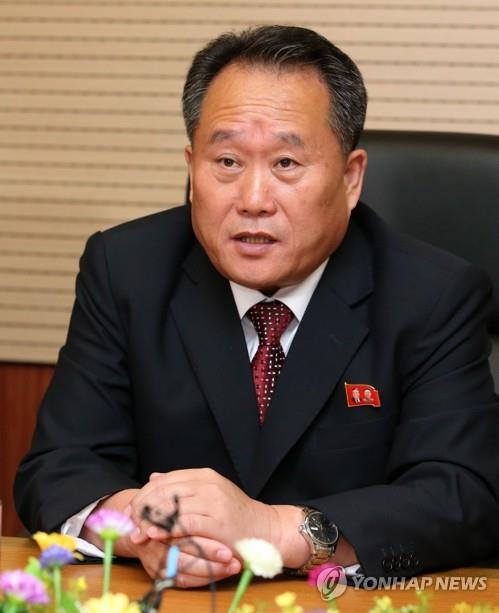 The dismissal of Ri Yong-ho, a seasoned career diplomat well versed in diplomacy towards the U.S., as the country's foreign minister came amid the communist country's repeated stance that it will not sit down with the U.S. for denuclearization negotiations.

As the negotiations with the U.S. have been in the doldrums, the North has internally and externally vowed a "long-term" battle on the front with the United States.

The replacement of North Korea's foreign minister appears to be also linked with the recent return of some North Korean ambassadors back to the home country.

North Korean Ambassador to China Ji Jae-ryong and Ambassador to the United Nations Kim Song were seen departing for Pyongyang on Saturday, sparking speculation of a possible gathering of overseas-based ambassadors in the North Korean capital.

The former foreign minister did not appear for the final-day photo session of a plenary meeting of the North Korean ruling party's Central Committee on Dec. 31, 2019, sparking questions about his whereabouts.