The memorial service for Hwang Sun-hui, deputy to the North's rubber-stamp parliament and curator of the Korean Revolution Museum, was held in Pyongyang on Sunday, according to the Korean Central News Agency.

Hwang, called by state media a "veteran fighter of the first generation of the Korean revolution," died Friday at the age of 100. She was a member of the "partisan" anti-Japanese forces that the North's founder led in China during Japan's 1910-45 colonial rule.

Kim did not attend the funeral, but other senior officials from the ruling party, including the North's No. 2 leader Choe Ryong-hae, attended the ceremony.

As her hearse left for the Revolutionary Martyrs Cemetery, "Passers-by stopped and expressed their sorrow at her death," the report said. 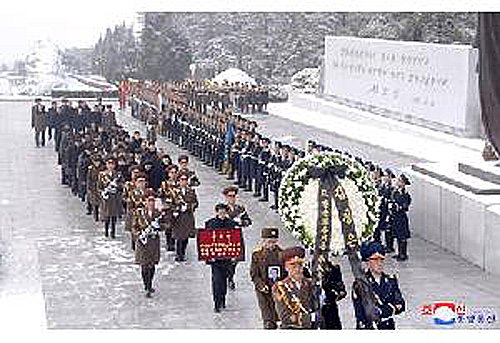