SEOUL, Jan. 20 (Yonhap) -- "Parasite," Bong Joon-ho's black comedy film, has clinched a key award at this year's Screen Actors Guild (SAG) Awards in the United States, the film's latest achievement that bodes well for its showing at the Academy Awards next month.

The South Korean film's 10-person cast, including Song Kang-ho and Cho Yeo-jeong, was named the winner of the 26th Screen Actors Guild Award for Outstanding Performance by a Cast in a Motion Picture in the award ceremony held on Sunday (U.S. time) in Los Angeles' Shrine Auditorium.

It was the SAG's first presentation of the key film award to a foreign-language movie in its 25-year history.

"Parasite" competed with four other titles, "Bombshell," "The Irishman," "Jojo Rabbit" and "Once Upon A Time," in the category.

Taking the stage to accept the award with other cast members, Song said in his acceptance speech, "I am honored to take this major award in front of such great actors I respect, and I will remember tonight forever."

The South Korean actor also said his movie is about "co-existence." He added, "Winning this top award makes me believe that we did not miscreate the movie after all," triggering a wave of laughter in the audience.

Launched in 1995, the SAG Awards, a major Hollywood awards event, is considered a key indicator for the Oscars the following month and bodes well for "Parasite" at the Feb. 9 event.

"The Irishman," "Jojo Rabbit," and "Once Upon a Time in Hollywood" will compete with "Parasite" at the Oscars. 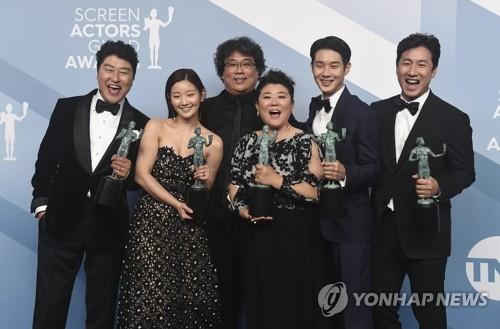