SEOUL, Jan. 20 (Yonhap) -- Joint Chiefs of Staff Chairman Gen. Park Han-ki called for a staunch readiness posture on Monday during his inspection of a border security unit near the Yellow Sea, his office said.

The purpose of the visit was to check on the readiness of and encourage the soldiers at the unit in charge of the maritime and riverside surveillance near the western sea border ahead of the upcoming Lunar New Year holiday, according to the JCS.

"It is necessary to arm ourselves with capabilities to respond to any incidents at any time through a practical level of education and training," Park said, calling for the utmost efforts to make it possible "win first and then go to war."

Tensions remain high on the Korean Peninsula amid chances of a North Korean military provocation. In its New Year's Day announcement, the communist country warned that it will show off a "new strategic weapon" in the near future, which experts say could be an advanced type of intercontinental ballistic missile (ICBM) or submarine-launched ballistic missile (SLBM).

The holiday season runs from Friday to next Monday. 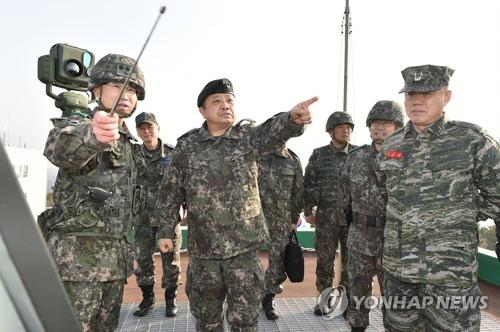