WASHINGTON, Jan. 20 (Yonhap) -- U.S. President Donald Trump appeared to suggest Monday that the stationing of American forces in South Korea is a form of foreign aid, rejecting the long-held view that the troop presence serves both countries' interests.

Trump's lawyers made the case in the 110-page Trial Memorandum for the Senate's impeachment proceedings against the president. The trial is set to begin in earnest Tuesday, with Trump facing charges of abusing his power by asking Ukraine to investigate Democratic political rival Joe Biden and withholding U.S. military aid to the country in the process. 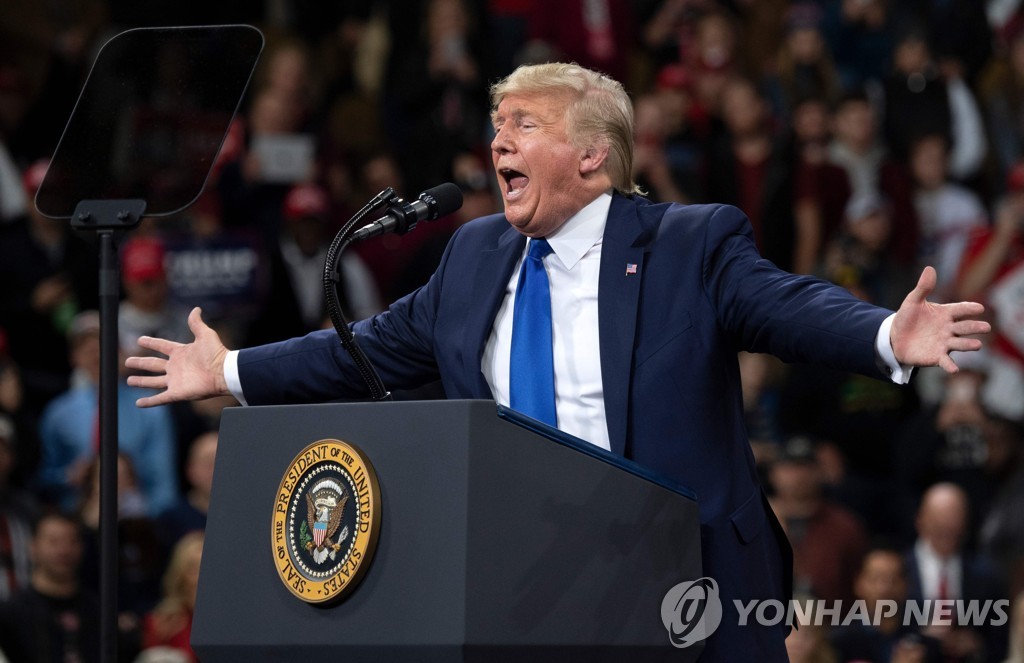 In the memo, Trump's defense presents arguments for why "Pauses on Foreign Aid Are Often Necessary and Appropriate."

"Placing a temporary pause on aid is not unusual. Indeed, the President has often paused, re-evaluated, and even canceled foreign aid programs," it says.

The memo goes on to cite the example of a tweet Trump sent in August 2019 before formal negotiations on renewing a defense cost-sharing deal between South Korea and the U.S. got under way.

"In August 2019, President Trump announced that the Administration and Seoul were in talks to 'substantially' increase South Korea's share of the expense of U.S. military support for South Korea," the document reads.

Other examples include the Trump administration's announcement in September 2019 that it was withholding more than US$100 million in aid to Afghanistan over concerns about government corruption.

Another example is Trump's decision in June to cut or pause more than $550 million in foreign aid to El Salvador, Honduras and Guatemala "because those countries were not fairly sharing the burdens of preventing mass migration to the United States."

Washington has been heaping pressure on Seoul to significantly increase its financial contributions to the upkeep of 28,500 American troops on the peninsula.

The last round of negotiations was held in Washington last week, following the expiry of the previous cost-sharing deal at the end of December.

The talks ended without a breakthrough. The next day, U.S. Secretary of State Mike Pompeo and U.S. Defense Secretary Mark Esper penned a joint opinion piece in The Wall Street Journal saying South Korea is an ally, not a dependent, and should contribute more to its national defense.

Meanwhile, Trump's defense also argued that the president brought "fresh and successful approaches to foreign policy," including in relations with NATO, China, Israel and North Korea.