BUSAN, Jan. 21 (Yonhap) -- Gimhae International Airport, the gateway to Busan and southeastern South Korea, shifted to a heightened alert status Tuesday, after the country confirmed its first case of the China coronavirus the previous day.

A Chinese woman, who arrived at Incheon International Airport, west of Seoul, on a China Southern Airlines flight Sunday, has tested positive for the virus, fueling concerns that a pneumonia-like illness is set to spread across China and Asia.

The Korea Centers for Disease Control and Prevention (KCDC) has since elevated the country's infectious disease alert level from "attention" to "watch," and asked airports and sea ports nationwide to strengthen quarantine efforts.

The Gimhae airport, which receives a large share of its international traffic from China, also remains on high alert. 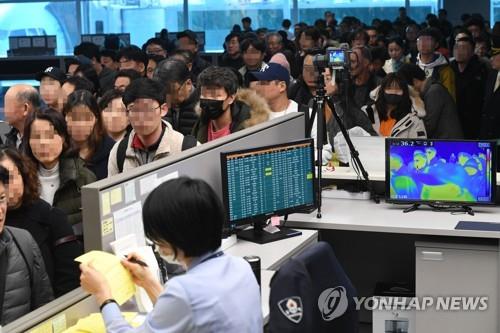 Gimhae has no direct flight route to Wuhan of Hubei Province, where the virus appears to have originated, but operates a number of routes to other cities in China and Southeast Asia, where many pneumonia-like cases have been reported.

As of Monday, China has reported 201 confirmed cases of coronavirus infection, including 198 in Wuhan, while Thailand and Japan have reported two and one, respectively.

A KCDC official at the Gimhae airport said the agency is closely checking body temperatures of international passengers arriving from China and other regions.

The airport has also been offering information and guidance on preventive measures for infectious diseases to China-bound travelers.