Capping monthslong deliberations that pitted security cooperation with Washington against economic relations with Tehran, Seoul announced it would temporarily expand areas of operations for its anti-piracy Cheonghae unit to cover the passageway off Iran.

The naval unit, now stationed in the Gulf of Aden, will operate independently of the International Maritime Security Construct (IMSC), a U.S.-led military coalition to safeguard freedom of navigation in the waterway, though it would cooperate with the coalition if need be. Two South Korean liaison officers will be dispatched to the IMSC.

The multinational coalition was launched in September under a U.S. initiative to protect the Strait of Hormuz, which is also strategically vital for South Korea given that it hosts key shipping lanes for more than 70 percent of its oil imports. 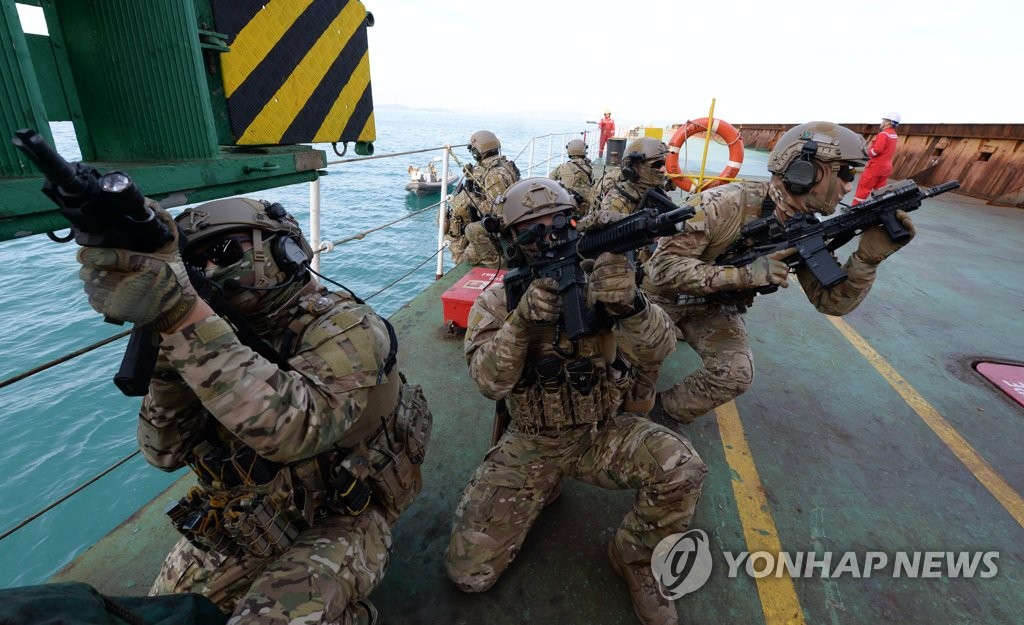 With mounting tensions with the Islamic republic, Washington has been seen ramping up pressure on its allies to contribute to its drive to protect what it sees as a global commons in the Middle East. Japan has decided to send a destroyer and two P-3C patrol aircraft to the strait under its own initiative.

"Seoul's decision obviously came as it sought a delicate balance between the U.S. and Iran," Nam Chang-hee, a professor of international politics at Inha University, said.

"The independent operations in the strait will not provoke Iran too much, while the decision highlighted Seoul's consideration of contributions to the long-standing security partnership with the U.S.," he added.

A core factor in Seoul's deployment decision appears to be Washington's repeated calls for alliance contributions at a time when the allies seek to closely coordinate to bring North Korea back to the negotiating table.

In particular, South Korea has been eager to highlight its growing security role beyond the peninsula as part of efforts to tamp down Washington's pressure for a hefty increase in Seoul's share of the cost for the upkeep of 28,500 American troops here.

"It is fair to say that the deployment was a strategic decision in light of the spirit of the evolving alliance and with regards to the ongoing negotiations over Seoul's financial contributions to the stationing of American troops in Korea," Kim Yeol-soo, a security analyst, said.

Seoul's deployment plan also came as it is striving to elicit Washington's cooperation in bolstering inter-Korean cooperation through such projects as arranging individual tours to the North, which some observers warn could breach anti-Pyongyang sanctions.

U.S. officials have stressed that such projects should proceed "in lockstep" with progress in the North's denuclearization -- a sign that it is against any move to weaken the current sanctions regime thought to be a key driver of change in the North's behavior.

Seoul's deliberations on the troop dispatch picked up pace following an upsurge in tensions in the waters off Iran that was caused by the U.S. killing of a top Iranian general and Tehran's subsequent retaliatory strikes earlier this month.

Growing volatility in the Middle East bolstered voices in South Korea in favor of a troop dispatch to protect Korean oil tankers and nationals passing through the waterway, and contribute to U.S. maritime security operations.

But Seoul officials had apparently been wrestling with a trickier question: What if the dispatch would seriously worsen ties with Iran and infuriate Iranian-backed militia groups that could potentially target citizens of South Korea, a key ally of the U.S.?

The numbers of South Korean nationals in Iraq and Iran are about 1,600 and 290, respectively. There are also 150 South Koreans in Lebanon and 700 in Israel, according to foreign ministry officials.

To ensure their safety, Seoul officials have been beefing up diplomacy with Iran and related countries while mobilizing embassy personnel to urge South Korean residents in the Middle East to get out of harm's way.

Hopes for a de-escalation have also emerged as Iran's retaliatory strikes following the U.S. slaying of Qassem Soleimani appeared carefully calibrated to avoid any major war with the world's strongest military.

Iran's full-blown armed conflict with the U.S. could worsen its economic travails and public sentiment against its regime -- and thus undermine the legitimacy of the current leadership in Tehran, observers said.