"Our aim is to create strong armed forces of a quality that can cope with whatever the security circumstance is," he said during a meeting with top defense ministry officials and military commanders.

Moon was on his first official visit to the Gyeryongdae military compound, 160 kilometers south of Seoul, to receive annual reports from the Ministry of National Defense and the Ministry of Patriots and Veterans on their affairs. Gyeryongdae hosts the headquarters of South Korea's Army, Navy and Air Force.

The most important thing is to establish a robust defense posture that is "impregnable," he said in opening remarks that pool reporters were allowed to cover.

Moon said a strong military power is a necessity for the ultimate goal of peace and prosperity on the Korean Peninsula.

"(We) should have comprehensive defense capabilities to cope with conventional and non-conventional security threats that are diversifying and advancing day by day," he said.

He ordered the military to make constant and thorough preparations for regaining the wartime operational control (OPCON) of the nation's troops from the United States by bolstering its own combat power on the basis of the rock-solid alliance.

He pointed out that South Korea's defense budget exceeded 50 trillion won (US$43 billion) for the first time this year. The exact figure, 50.2 trillion won, is a 7.4-percent hike from last year's.

During the session, Chung Eui-yong, director of national security at Cheong Wa Dae, asked a question about progress in the OPCON transition works.

Park said the military will make 2020 a year to demonstrate the South Korean military's ability to have wartime OPCON through the assessment of its full operational capability (FOC).

Cheong Wa Dae later said Moon has ordered the military to get fully ready for countering "omnidirectional" threats including supranational and non-military ones.

Earlier in the day, the defense ministry announced its plan to send troops to the Strait of Hormuz to support a U.S.-led maritime security operation.

South Korea has decided to broaden the operational area of its anti-piracy Cheonghae unit, stationed near Somalia, to the strait.

Moon also noted that there has been no conflict on or near the border between the two Koreas since the implementation of their Sept. 19 Comprehensive Military Agreement, signed during his trip to Pyongyang in 2018, according to Cheong Wa Dae's press statement.

He instructed the military to continue implementing the accord and playing a supporting role in the journey toward permanent peace on the peninsula.

He described strengthening the competitiveness of the nation's defense industry as another key task. 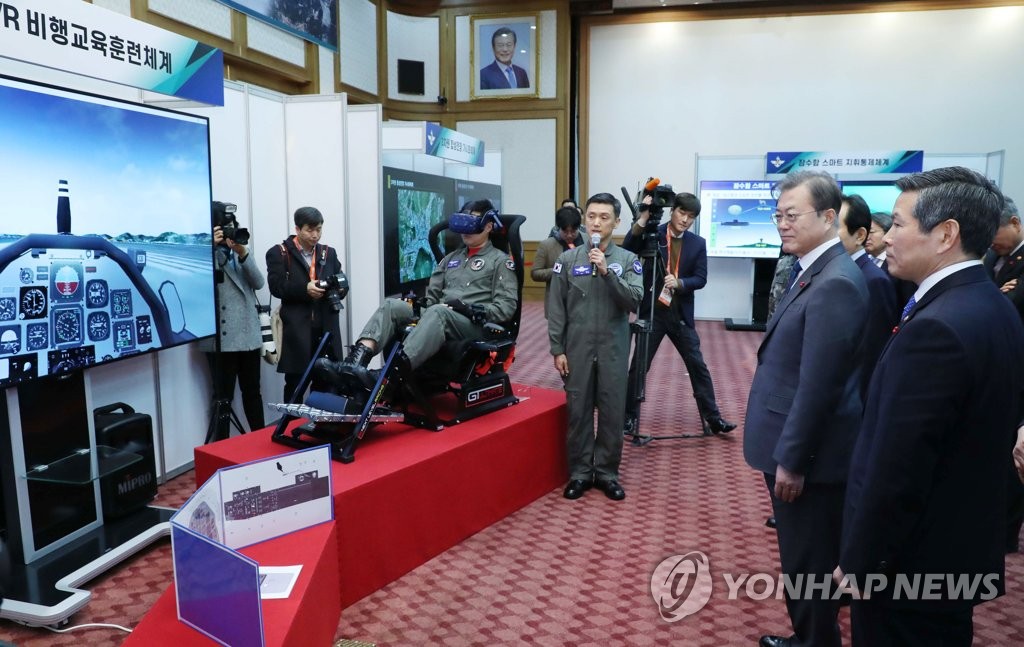