The legislature approved a proposal on the establishment of a new investigative body for corruption among high-level officials on Dec. 30 and two bills on the redistribution of investigative authority between the prosecution and police on Jan. 13.

"As it is said that the devil is in the detail, it may be harder to adjust the details of prosecution reform," he said during a Cabinet meeting at the main government complex in central Seoul.

He emphasized the need to "secure objectivity and political neutrality" in proceeding with follow-up measures.

"It is very difficult to change reality with vested interests," he said, alluding to prosecutors' resistance to the new policies that would weaken their power.

The prosecution has investigated a series of corruption allegations surrounding Cho Kuk, former presidential aide and justice minister. Cho is said to be a key architect of Moon's prosecution reform. 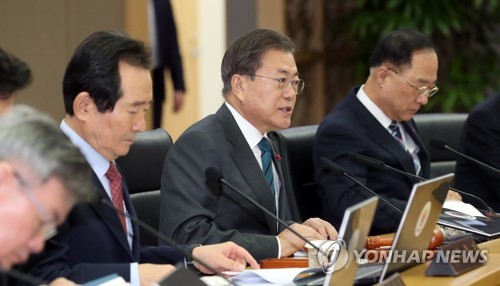 Moon also urged the government to speed up police reform, an agenda that has been sidelined in the wake of the administration's focus on the prosecution system.

"The key to reforms of powerful organizations is controlling the abuse of power through checks and balances," he said. In this regard, prosecution reform should be paired with police reform, he added.

As the police agency is given greater powers in criminal investigations, its power should also be dispersed, he said.

He urged the government to accelerate its plans to introduce a local autonomous police system and divide the police into two branches, one in charge of administrative affairs and the other in charge of criminal investigations.
(END)