Since the 1997-98 Asian financial crisis forced South Korea to receive an emergency bailout loan from the International Monetary Fund in return for a painful restructuring of its banks and corporate sectors, middle-aged workers here have faced greater instability in their jobs.

The expression "saojeong" literally means that middle-aged salarymen are forced to retire at the age of 45.

Although the term has been common over the past two decades, people in their 40s in Asia's fourth-largest economy, most of whom are breadwinners, still struggle to find jobs.

On a monthly basis, the number of employed people in their 40s fell for the 49th consecutive month in December.

The dire employment situation facing 40-somethings last year was in sharp contrast to the overall job market, which saw the number of new hires increase by 310,000 -- the highest-ever rate. 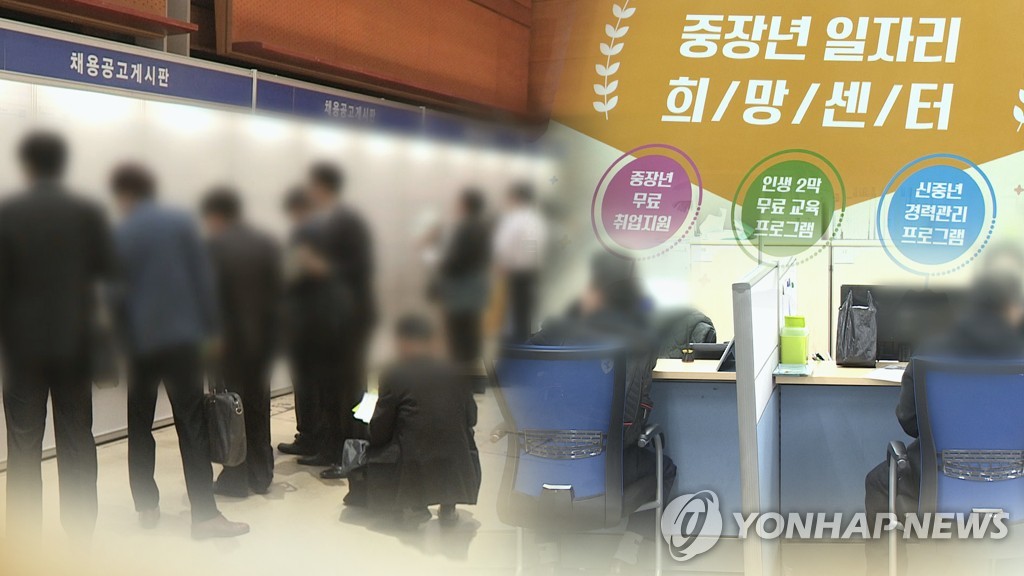 The current job crunch for the middle-aged is mainly attributable to a downturn in the nation's manufacturing industry.

South Korean manufacturing firms have been struggling with a steady decline in exports, largely caused by the U.S.-China trade conflict and the persistent downturn in the global semiconductor market.

South Korea's exports fell 10.3 percent on-year in 2019 to $542.4 billion, their worst performance in a decade, according to government data.

The nation's manufacturing sector shed 81,000 jobs in 2019, causing it to fall by the steepest rate since 2013, when the statistics agency began compiling such data in the current form.

Also, the retail and construction sectors, which hire most 40-something people, lost a combined 75,000 jobs last year.

Professor Sung Tae-yoon at Yonsei University in Seoul said the government created most jobs for people in their 60s by expanding its fiscal spending last year.

However, the quality of employment for people in their 30s and 40s worsened as the manufacturing sector suffered a downturn, Sung said.

The 2019 employment data showed that the nation's job recovery was based on a rise in the number of 60-something people who worked 10 hours or less per week, helped by state-led job creation schemes, the professor said.

"In contrast, the numbers of employed people in their 30s and 40s and decent manufacturing jobs declined last year," Sung said.

In his New Year address, President Moon Jae-in vowed to improve the job situation for people in their 40s, calling them the "backbone of the Korean economy."

"People's lives are based around jobs. Last year, the government provided the largest-ever funding for job creation. Support for providing jobs tailored to the different needs of young people, women and senior citizens was enhanced," Moon said. "As a result, there has been an appreciable recovery in jobs."

The president added, "This year, we will further promote these positive trends. In particular, we will work to address sluggish employment in manufacturing and among those in their 40s, who serve as the backbone of the Korean economy."

The Ministry of Economy and Finance has said it will unveil comprehensive measures in March to create jobs for people in their 40s.

Among the possible measures under review for 40-something people are vocational training, support for business start-ups and financial support packages for the unemployed, according to the ministry.

Analysts do not predict that the job market will improve for middle-aged workers in the coming years.

Lee Geun-tae, a researcher at the LG Economic Research Institute, said, "The overall improvement in the job market does not correctly mirror the economic trend because a rise in the number of jobs is driven by part-time, low-paid jobs."

In a recent report, Moody's Analytics said South Korea's unemployment rate has been rising on a seasonally adjusted basis.

"Weakness came as the monthly deterioration in the economically active population was overwhelmed by the fall in the number of employed people," the report said.

"The steady rise in the unemployment rate is a consequence of an extended period of weakness in the labor market and reflects the persistent pressures from weakened external demand that are exacerbating existing softness in domestic demand," it said.