SEOUL, Jan. 22 (Yonhap) -- South Korean stocks surged by more than 1 percent on Wednesday, rebounding from the previous session's heavy selling triggered by rising concerns over the spreading China coronavirus, although market sentiment remains fragile over the virus. The Korean won rose against the U.S. dollar.

Institutional investors purchased a net 287.5 billion won (US$246.9 million) worth of stocks, giving a boost to the main index. 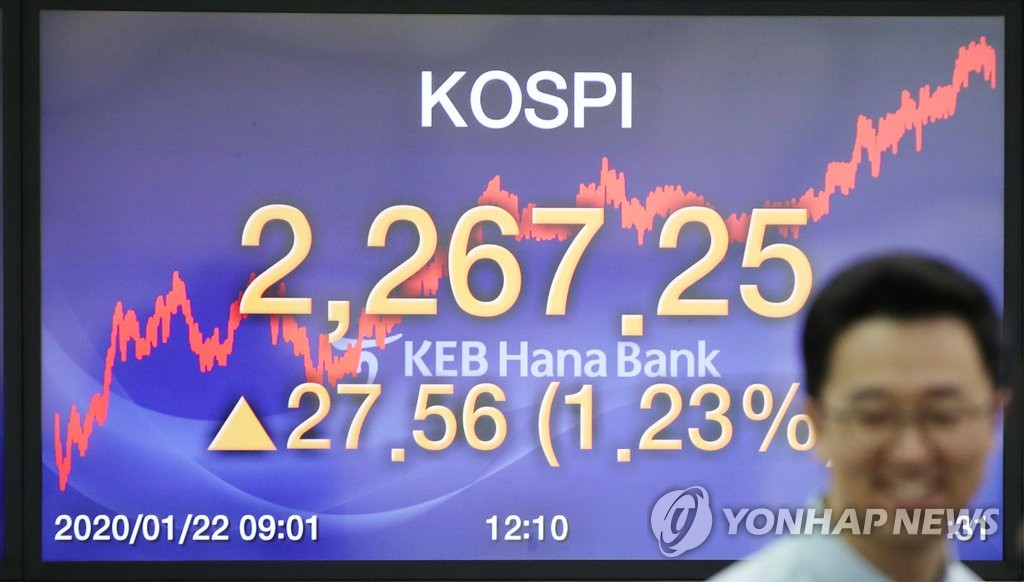 Han Ji-young, an analyst at Cape Investment & Securities, said institutional investors scooped up large-cap stocks as they believe initial market reactions to concerns over the spread of a new coronavirus, currently circulating in China and other Asian countries, were excessive.

China announced earlier in the day that it would take strong measures to curb the spread of the virus, easing fears over the pandemic disease.

Also, the Korean economy reported a stronger than expected economic expansion for the fourth quarter of the year, helped by increased fiscal spending and firm domestic demand, fanning hopes that Asia's fourth-largest economy is poised to rebound this year.

The economy grew at the slowest pace of 2 percent in a decade, weighed down by an extended slump in exports and a sharp decline in prices of semiconductors, a key export item.

For the year, the economy is projected to grow 2.3 percent.