SEOUL, Jan. 22 (Yonhap) -- A U.S. military chief expressed gratitude Wednesday to South Korea for its decision to send troops to the Strait of Hormuz, officials said.

On Tuesday, Seoul's defense ministry announced that it will expand the mission area of its anti-piracy Cheonghae Unit stationed in the Gulf of Aden to cover the Strait of Hormuz to safeguard its citizens and vessels passing through the waterway and to contribute to international efforts to ensure the freedom of navigation.

The 300-strong unit will operate independently of the U.S.-led coalition of the International Maritime Security Construct, but two liaison officers will be sent to its headquarters for cooperation, according to the ministry.

In response, the U.S. general said he understands and appreciates the decision, according to the officials.

Amid simmering tensions with Iran, the United States has asked South Korea and other allies to join a military coalition to secure the region.

Earlier, a State Department spokesperson also said that the U.S. "welcomes and appreciates" the decision, saying it demonstrates the strength of the bilateral alliance.

"The two chairmen also agreed to further cement their combined defense posture based upon the staunch alliance so as to proactively support diplomatic efforts by the two governments for the complete denuclearization of the Korean Peninsula and the establishment of a permanent peace," the JCS said in a release. 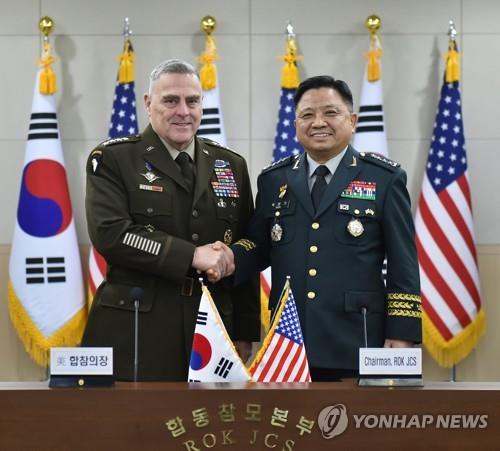