SEOUL, Jan. 22 (Yonhap) -- South Korea scurried Wednesday to take preventive measures against a new coronavirus from China, as a large number of travelers from the neighboring country are expected to enter the country through its airports and ports nationwide ahead of the Lunar New Year holiday starting this week.

The quarantine authorities have committed equipment and human resources in a maximum way as part of efforts to prevent the virus, which appears to have originated from the central Chinese city of Wuhan, from spreading in the country via Chinese travelers coming in its gateways.

On Monday, the Korea Centers for Disease Control and Prevention elevated the country's infectious disease alert level from "blue" to "yellow" and asked airports and sea ferry terminals nationwide to strengthen quarantine efforts.

A quarantine official said at the arrival lobby of Incheon airport, west of Seoul, on Wednesday that the authorities are supposed to conduct further examinations on any passengers who have a fever of 37.5 C or higher or symptoms of a disease in the respiratory system. If they are suspected to have been infected with the disease, the authorities will put them in a designated isolation ward.

A Chinese national who arrived through Incheon airport, South Korea's main gateway, was confirmed with the disease on Monday, and the 35-year-old woman from Wuhan is currently being quarantined at a designated isolation ward and is in a stable condition, with no pneumonia-like symptoms present, according to the KCDC.

The outbreak of the Wuhan virus also placed the quarantine authorities at Gimhae airport in the country's southeastern region on a high alert. Quarantine officials placed three more Chinese interpreters to help the quarantine work and checked every passenger from Chinese cities with a thermal camera to see if they have a fever, even though the airport has no routes linking to Hubei Province, in which Wuhan is located.

On South Korea's largest island of Jeju, which more than 30,000 Chinese tourists are expected to visit during the holiday season, the quarantine authorities conducted a thermal camera test on every traveler coming on 10 flights from Chinese cities, including Beijing, Shanghai, Ningbo and Hangzhou.

At Cheongju airport in central South Korea, through which 137,000 Chinese people entered South Korea last year, quarantine officials used a clinical thermometer to take the body temperature of any traveler who had even a slight fever.

The quarantine authorities at major ports in Incheon and other cities were on high alert. About 100 people alighted from a ferry at the Incheon International Ferry Terminal, which provides ferry services to 10 Chinese destinations, from Shidao in China's northeastern province of Shandong.

The terminal is known as a major destination for many Chinese peddlers dealing in South Korean goods. An official at the terminal said, "We have no direct route between Incheon and Wuhan, but we are so nervous as Chinese peddlers could travel a lot in China and have much contact with people."

On Wednesday, the Chinese government said the death toll from the virus infection increased to nine and confirmed the infection of 440 people in 13 provinces. 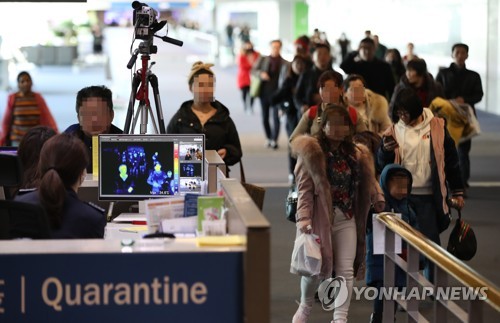