SEOUL, Jan. 22 (Yonhap) -- South Korea's first transgender soldier on Wednesday pleaded to be allowed to continue to serve after the military decided to discharge her.

Byun Hee-soo, an Army staff sergeant in her 20s, voluntarily enlisted as a man in 2017 and underwent sex reassignment surgery in Thailand in November last year. A military panel decided not to allow the noncommissioned officer to stay in the Army.

Right after the decision was announced, Byun came out in public and held an emotional press conference before TV cameras, requesting equal treatment for sexual minorities and the right to complete the military service.

"I hope that sexual minorities in the military can carry out their duties without discrimination and I want to set a good precedent in this kind of case and want to add power to make that happen," she said while wearing a military uniform. 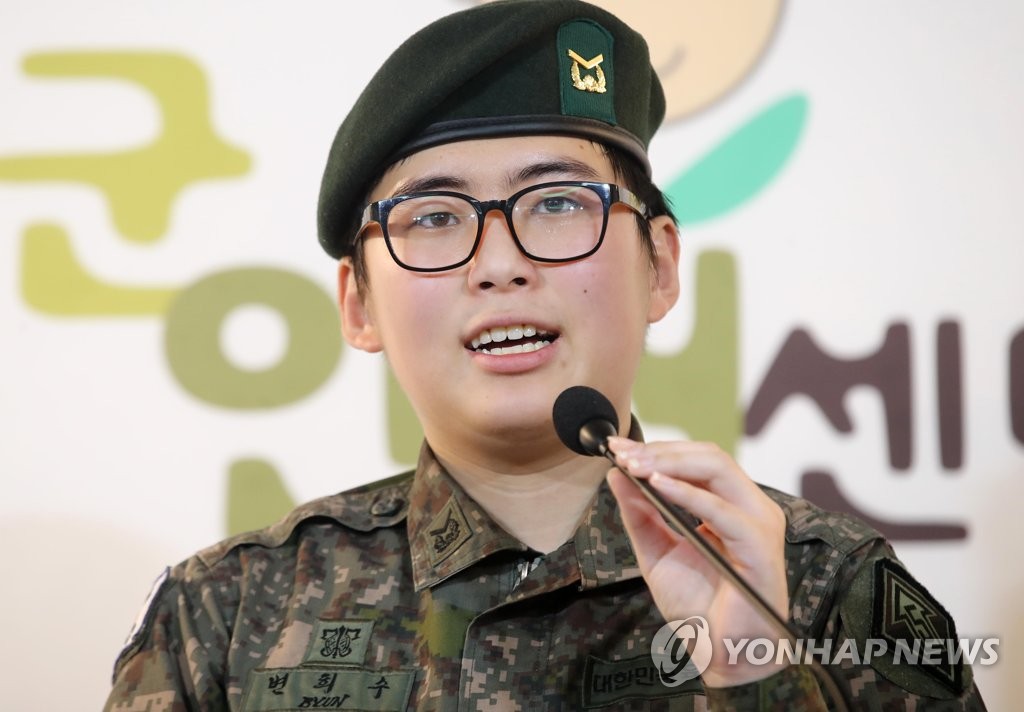 The noncommissioned officer said serving in the military had been her childhood dream and that she still wishes to defend the country and its people on the front line.

"I am well aware that the military is not yet ready to accept transgender soldiers. But the military is making progress toward respecting human rights," said Byun. "If the military properly assigns me based upon my unique experiences, however, it could create positive effects for the military as a whole."

Byun went on to say she wants to show everyone that she can be a great soldier despite the sex change and called for the chance to defend the country.

The panel made a discharge decision, as this case constitutes a reason for inability to serve under related laws, including the Military Personnel Management Act, the Army said in a statement.

Noting that the decision was in line with due process based upon the results of a medical examination, the Army said it will "continue to make diverse efforts to protect human rights of service personnel and to prevent any undue discrimination.

Currently, no specific regulations exist on what to do with those who have sex reassignment operations while in service.

It is the first case of its kind in South Korea.

Byun will be discharged from the Army as of 12:00 a.m. on Thursday.

The National Human Rights Commission of Korea on Tuesday advised the Army chief to delay holding the committee meeting, citing the possibility of discrimination, but the Army held the session as scheduled.