SEOUL, Jan. 27 (Yonhap) -- South Korea's economy is expected to rebound this year from the slowest growth in a decade last year, but it may continue to face many economic headwinds, including sluggish demands at home and abroad, analysts said Monday.

Asia's fourth-largest economy grew 2 percent from a year earlier in 2019, the slowest since 2009, as its exports and facility investment remained weak, the Bank of Korea said last week.

"We expect the South Korean economy to grow at around 2.1 percent in 2020. We maintain our growth estimate for this year in that we did not see a clear sign of recovery in private consumption," said Chun Kyu-yeon, an economist at Hana Financial Investment. 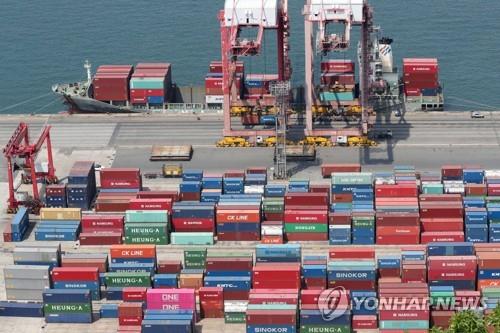 In 2019, fiscal spending jumped 6.5 percent on-year, making up shortfalls in other sectors, while private consumption grew 1.9 percent, slowing from 2.8 percent a year earlier.

"First of all, private spending may somewhat slow down. It is positive that consumer sentiment is improving based on an outlook for better economic conditions and that employment is rising on the government's aggressive job policy," Chun said.

"Only, in terms of job quality, we are only seeing a rise in employment in the service sector while employment in the manufacturing and construction sectors remain sluggish, which could work as a limiting factor in boosting consumption," she added.

Lee Young-hwa, an analyst at Kyobo Securities, also forecast a 2.1 percent on-year expansion for the Korean economy this year.

"The Korean economy is expected to post an annual growth of 2.1 percent in 2020 with a steady current account surplus, rate reductions, stimulus measures, such as an extra budget, and quantitative easing by most major economies working as positive factors supporting its economic growth," Lee said.

For the year, outbound shipments are expected to rebound 3 percent from last year's 10.3 percent on-year decline, on reduced uncertainties stemming from a trade row between the United States and China, and a rebound in prices of semiconductors, a key export item.

Korean economy may pull of slower-than-expected growth in 2020

Korean economy may pull of slower-than-expected growth in 2020