SEOUL, Jan. 27 (Yonhap) -- South Koreans' social networking service (SNS) use dipped for the first time in 2019, amid the waning popularity of sharing platforms, such as Facebook, data showed Monday.

According to the data from the Korea Information Society Development Institute (KISDI), 47.7 percent of people surveyed used SNS last year, down from 48.2 percent in the previous year.

Usage numbers had been rising steadily since the first tally was carried out in 2011, when it stood at 16.8 percent. This surpassed the 30 percent range in 2013 and topped the 40 percent mark in 2015. 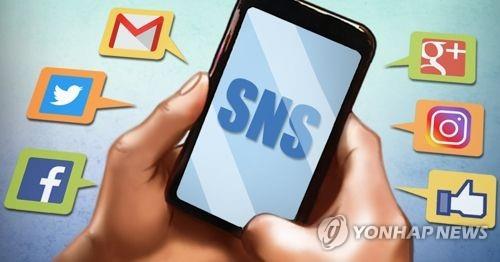 The survey was conducted on 10,864 people nationwide, with Facebook being the most favored platform at 29.6 percent followed by KakaoStory and Instagram at 26.3 percent and 19.3 percent, respectively.

Naver Band and Twitter trailed the front-runners with 10.6 percent and 5.3 percent, respectively, in the one-year period.

Meanwhile, TV was No. 1 in terms of devices watched by people with average viewing hours reaching around three hours per day. This was followed by mobile phones at just under two hours and fixed line phones at over five minutes. The average time a person sat before a computer stood at slightly longer than an hour, with paper publications getting just 29 minutes.