SEOUL, Jan. 23 (Yonhap) -- The leader of the Korean Confederation of Trade Unions (KCTU), a militant labor umbrella group, was given a suspended sentence Thursday for masterminding assaults on police during outdoor rallies.

The Seoul Southern District Court sentenced Kim Myeong-hwan to 2 years and six months in prison, suspended for four years, and ordered him to complete 160 hours of community service.

Kim was accused of overseeing violent illegal acts during KCTU members' four protest rallies in front of the National Assembly compound in Seoul on May 21, 2018, as well as March 27 and April 2 and 3 last year.

The rallies were aimed at blocking the passage of labor bills, including those calling for extending statutory flextime from three to six months to minimize side effects of the government's mandatory 52-hour workweek policy.

The prosecution requested a four-year prison sentence for Kim.

In Thursday's sentence, the court criticized Kim for "putting at grave risk the principle of representative democracy by orchestrating violent acts in a bid to curb Parliament from revising laws that the union body says do not reflect its demands."

The National Assembly is not supposed to solely represent the opinion of KCTU but should represent the entire nation's opinion in a consolidated way, it said.

"Violent rallies cannot become a proper way to fairly express an opinion. This case constitutes a grave crime, agonizing us over the decision of a sentence," it also said, adding it took into consideration that the labor group tried to express its political views in relation to workers' interests when it made the sentence decision. 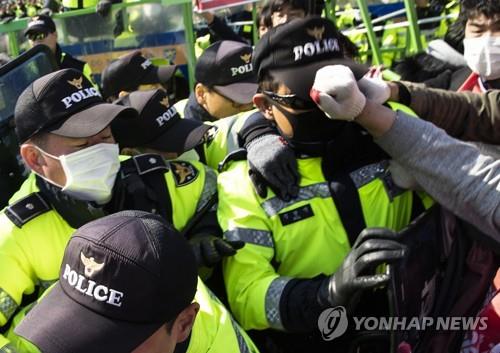