Washington and Pyongyang have not had formal denuclearization negotiations since the last round of talks in October ended without an agreement.

Ban, a former South Korean foreign minister, expressed disappointment that North Korea appears to have moved farther away from its commitment to dismantling its nuclear weapons program.

"I believe there will be an opportunity as time goes, and it's important, especially for North Korea, to seize this opportunity," he told reporters on the sidelines of an event announcing the 2020 "Doomsday Clock."

Citing the three meetings between U.S. President Donald Trump and North Korean leader Kim Jong-un, he added, "It's desirable for North Korea to seize this opportunity and use it to its advantage." 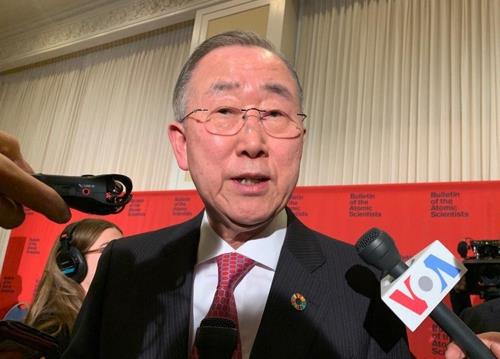 Trump and Kim had agreed at their first summit in June 2018 to work toward complete denuclearization of the Korean Peninsula in exchange for U.S. security guarantees, but progress has been scant amid differences over the extent of North Korea's denuclearization and sanctions relief from the U.S.

Ban suggested it is unrealistic for North Korea to expect sanctions to be eased without taking steps of its own.

On South Korea's push to allow individual tours to North Korea to promote inter-Korean reconciliation and facilitate denuclearization talks, Ban said he would not comment as it concerned the South Korean government.

"No country in the world is opposed to inter-Korean reconciliation," he said, emphasizing that there is no need to be discouraged despite the current impasse. "North Korea also needs to step out into the world and think about how it can become a respected member of the international community."