Kang's attendance at the Munich Security Conference set for Feb. 14-16 is expected to naturally lead to a one-on-one meeting with Pompeo, as the top American diplomat is also expected to attend the conference together with Defense Secretary Mark Esper and House Speaker Nancy Pelosi.

Japanese Foreign Minister Toshimitsu Motegi could also attend the conference, raising the possibility of the top diplomats from South Korea, the U.S. and Japan holding a trilateral session just as they did in San Francisco earlier this month.

North Korean Vice Foreign Minister Kim Son-gyong, who is in charge of European affairs, is also expected to attend the conference. Even if she meets either with Kang or Pompeo, however, meaningful discussions are not expected to take place because she does not handle inter-Korean or U.S. affairs.

Should Kang meet with Pompeo, one of the key topics is expected to be South Korea's push to expand inter-Korean exchanges, such as allowing its citizens to travel to North Korea on an individual basis, so as to help facilitate the resumption of nuclear talks between the North and the U.S.

The idea of individual trips to the North gained significant traction after President Moon Jae-in cited it earlier this month as one of the possible ways to bolster exchanges with the North without violating international sanctions on Pyongyang.

The U.S. has called for moving inter-Korean exchanges forward in lockstep with progress in nuclear talks. In particular, U.S. Ambassador to South Korea Harry Harris urged Seoul to make sure to consult with the U.S. before pushing for new projects with the North.

Sources said the South and the U.S. could hold a meeting of their "working group" on North Korea policy in Seoul early next month. Rhee Dong-yeol, director-general of the Korean Peninsula Peace Regime Bureau at the foreign ministry, is expected to represent the South, while his U.S. counterpart is likely to be Alex Wong, deputy assistant secretary of state for North Korea. 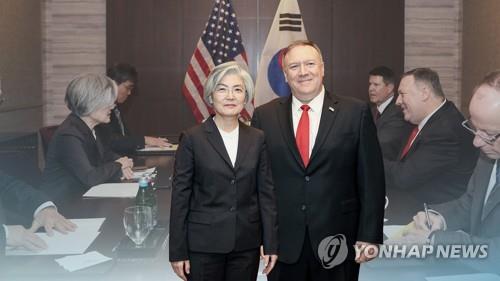 FM could meet with Pompeo in Munich next month

FM could meet with Pompeo in Munich next month