The Supreme Court upheld the lower court's decision that ordered the Hotel Shilla chief to pay 14.1 billion won (US$12.1 million) in an asset split to her estranged husband, Im Woo-jae. The court granted parental rights and custody of their only child to Lee. 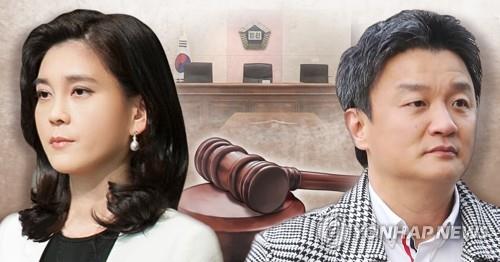 Lee and Im tied the knot in 1999 in a high-profile wedding -- she was an heiress of a multibillion dollar business group and he was a rank-and-file employee at a Samsung affiliate.

Lee filed for divorce against Im, then an executive at Samsung Electro-Mechanics Co., in October 2014 at a district court in Suwon, south of Seoul. The trial was later transferred to the Seoul Family Court when Im stated their last residence was in Seoul.

The Seoul Family Court confirmed the divorce, giving parental rights and custody to Lee and ordering her to pay 8.6 billion won to Im.

An appeals court in September last year upheld the decision, but raised the amount to 14.1 billion won, factoring in Lee's increased asset value.

The decision was seen as a win for the Samsung daughter, as Im had allegedly requested over 1 trillion won, one of the biggest amounts requested in an asset split trial in South Korea.