SEOUL, Jan. 27 (Yonhap) -- South Korea said Monday it will take actions, if necessary, to minimize any economic fallout from the Wuhan coronavirus amid concerns that the spread of the new deadly virus could pose downside risks to Asia's fourth-largest economy, in particular local consumption.

The country has reported four confirmed cases of the Wuhan coronavirus so far, with the third and fourth patients not screened at airports, raising concerns that the virus could spread across the country.

"Currently, the outbreak has not yet had a visible impact on the economy," Finance Minister Hong Nam-ki said during an emergency meeting. "However, we cannot rule out the possibility of the spread having negative effects on the economy."

Hong said South Korea will continue to closely monitor the financial markets at home and abroad and take necessary measures to reduce any market volatility and economic fallout. 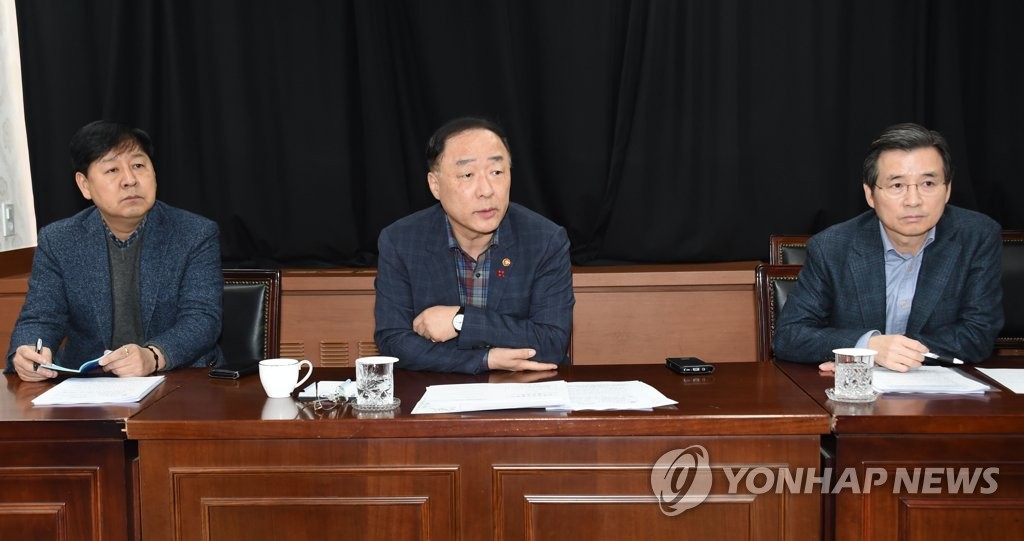 The spread of the virus has been rattling Asian financial markets as well as the U.S. stock market since its outbreak.

The Bank of Korea also said flights to safer assets have been increasing amid concerns over the spread of the Wuhan coronavirus across the globe, with prices of gold rising and oil prices plunging by more than 4 percent over the past four sessions.

"We need to remain vigilant as financial markets can experience increased volatility," BOK Gov. Lee Ju-yeol said in a meeting with his staff.

The central bank said earlier it is keeping a watchful eye on the international financial market around the clock to brace for a possible hard landing of the global economy.

South Korea's financial market, meanwhile, has been closed since Friday to mark the Lunar New Year holiday. It will reopen Tuesday.

The country is on extreme alert on Monday as additional confirmed cases of the Wuhan coronavirus were detected here amid mounting concerns the pneumonia-like illness may spread across the country despite stepped-up quarantine inspections.

South Korea reported the fourth confirmed case of the virus earlier in the day, and what is worrisome is that the third and fourth patients were not filtered upon their arrivals as they had not shown any symptoms, which means that other citizens they were in contact with could have been highly exposed to the new virus.

As the country reported additional cases of the Wuhan coronavirus, President Moon Jae-in ordered a thorough check of all entrants from the Chinese city of Wuhan, stressing the need for "preemptive measures" to prevent the situation from worsening through secondary infection.

China, meanwhile, has confirmed 2,744 infected people, 461 of whom are in a critical condition.