SEOUL, Jan. 27 (Yonhap) -- Prime Minister Chung Sye-kyun on Monday called for stepped-up efforts to prevent the spread of the deadly Chinese coronavirus as a fourth case of the pneumonia-like illness was confirmed in South Korea.

"The government takes the current situation very seriously as the new type of coronavirus is spreading rapidly around the world," Chung said during a visit to Boramae Medical Center. "What is most important is efforts to prevent the infection from spreading."

Chung also called for close information sharing between the central and local governments as well as between medical institutions, while asking citizens to report immediately to authorities if they develop suspicious symptoms.

Earlier in the day, the Korea Centers for Disease Control and Prevention (KCDC) confirmed South Korea's fourth case of the virus in a 55-year-old South Korean man who returned from the Chinese city of Wuhan on Jan. 20.

Officials said he visited a local clinic a day after his arrival when he showed signs of a cold. 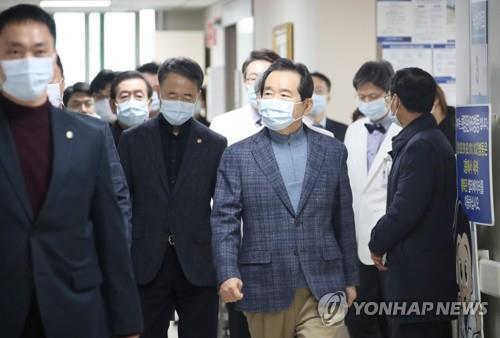