SEOUL, Jan. 28 (Yonhap) -- North Korea has stepped up quarantine efforts to prevent the spread of a new strain of coronavirus in the country, its official newspaper said Tuesday, as alarm grows over the global outbreak of the pneumonia-like illness that originated in China.

North Korea's media outlets have reported on the outbreaks of the virus in China and other nations and Pyongyang's preventive steps, though it has yet to report any confirmed case of its own.

The Rodong Sinmun said in an article the North's health authorities are setting up plans to prevent the spread of the virus, which has killed 80 people and infected more than 2,740 in China alone.

Authorities have stepped up inspections at borders, ports and airports and are thoroughly monitoring those who recently traveled abroad to make sure they can be isolated when they are suspected of having the disease, the paper added.

"Quarantine efforts are under way ... to prevent the new coronavirus from ever entering our country," the newspaper said.

The paper also reported on global outbreaks of the virus, citing confirmed cases in South Korea, the United States, Canada and Japan. It did not, however, mention whether there was any confirmed case of the disease.

Since the illness broke out in China, the North has reportedly shut down its borders with the neighboring country, through which most foreign travelers enter the reclusive state.

Meanwhile, South Korea's unification ministry said that it is monitoring North Korea with regard to the new virus as Seoul steps up its efforts to stem the spread of the virus after four confirmed cases of the illness.

North Korea has asked South Korean officials working at their joint liaison office in the North's border town of Kaesong to put on masks as part of its beefed-up quarantine efforts, according to the ministry.

South Korea is also checking the temperature of the officials heading to the office. Previously, the authorities just checked their temperature when they crossed the border to return home.

"It is necessary to keep an eye on the situation (in the North)," a ministry official told reporters. "Chances appear to be low that the Wuhan pneumonia could spread between the two Koreas through human contact." 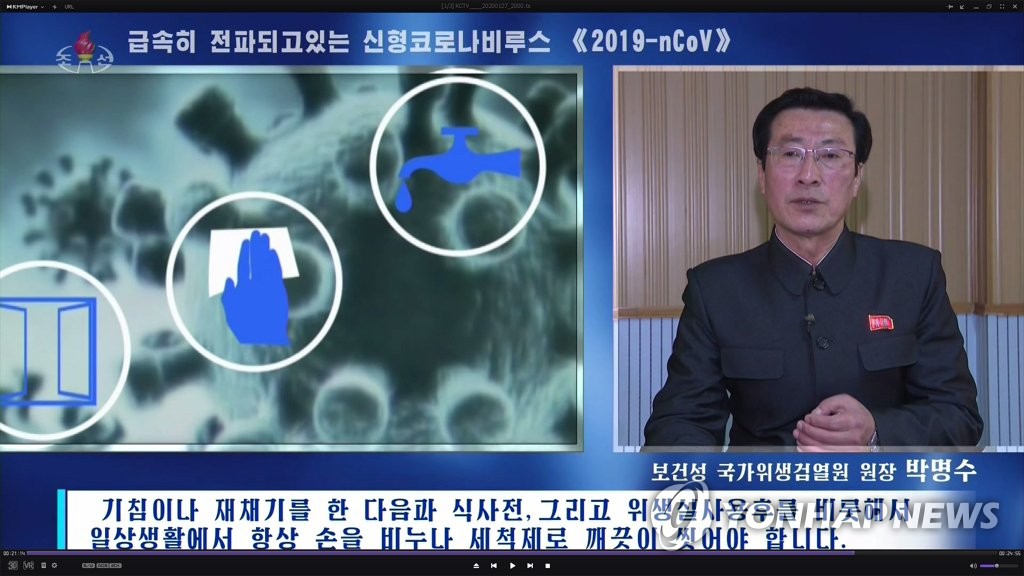