SEOUL, Jan. 28 (Yonhap) -- The military authorities have isolated around 90 soldiers who recently visited China as part of efforts to prevent the spread of a new type of coronavirus to the barracks, the defense ministry said Tuesday.

The move came amid growing concerns over the outbreak of the deadly coronavirus across the globe that began in the Chinese city of Wuhan. Four cases have been confirmed in South Korea.

Of around 150 soldiers who visited China in recent weeks, 92 service personnel, including 38 conscripts, have been isolated either at their homes or in separate areas of their bases, as they could be in the incubation period for the pneumonia-like illness, according to the ministry.

"No suspected cases have been found in the military so far. But we have made various efforts as preventive steps," ministry spokesperson Choi Hyun-soo told a regular briefing.

The authorities have advised service personnel to refrain from going out, though they stopped short of controlling their movements, Choi added.

Soldiers have also been advised to avoid travel to China, if possible, and to instantly report to the authorities when experiencing symptoms such as fever or coughing.

The Armed Forces Medical Command issued guidelines earlier this month calling for strengthened monitoring and has come up with a range of measures to support nationwide efforts to contain the virus. The Armed Forces Capital Hospital is also ready to receive Wuhan coronavirus patients, according to officials.

Currently, around 100 military medics and soldiers have been mobilized and assigned to major checkpoints set up at seaports and airports across the country for body temperature checks and other quarantine efforts, they added.

In line with pan-government containment efforts, the Military Manpower Administration (MMA) said it decided to allow people to delay their planned enlistment in case they recently visited China or had contact with those who traveled to the country. 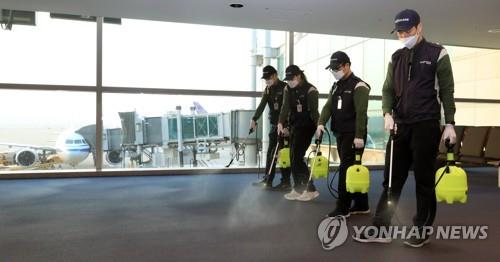